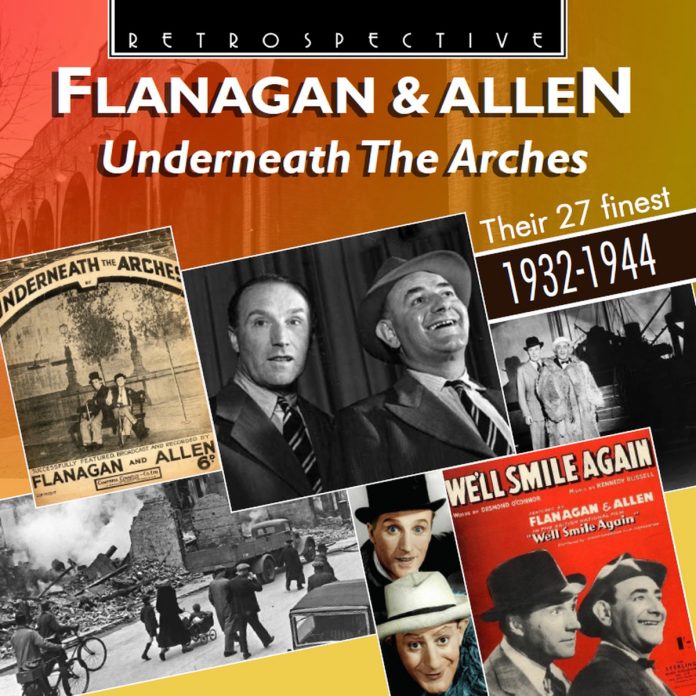 Bud Flanagan and Chesney Allen were part of the Crazy Gang which included two other double acts – Jimmy Nervo and Teddy Knox along with Charlie Naughton and Jimmy Gold. Occasionally “Monsewer” Eddie Gray would join them in their comedy routines which bordered on mayhem and total anarchy.

Along with George Formby and Gracie Fields they were probably the most popular music hall act of the 30s and 40s. My father knew Bud Flanagan so I have happy memories of complimentary tickets at London’s Victoria Palace where the Gang often held court during the 50s. By then Chesney Allen had retired due to ill health. After their last Royal Command Performance in 1961 Prince Phillip asked Bud Flanagan what they were doing next. Bud said “We’ve got a crate of brown ale in the dressing-room so I thought we might all go back to your place”.

Flanagan & Allen often worked apart from the Crazy Gang and this CD concentrates on some of their most popular material. Allen’s bass vocalising, which was more spoken than sung, and Flanagan’s mellifluous baritone created a quite unique charm and blend. Some of this material reflected the Depression era of the time like Underneath The Arches, Dreaming, Wanderer and Down And Out Blues. Numbers like We’re Gonna Hang Out The Washing On The Siegfried Line, Mr. F.D.R. Jones, If A Grey-Haired Lady Says “How’s Your Father?” and We’ll Smile Again display a sunny, optimistic view of the horrors of WW2.

Bud Flanagan’s memorable voice was introduced to a whole new audience in 1968 when he sang the theme song for Dad’s Army – Who Do You Think You Are Kidding, Mr. Hitler? It is a delightful pastiche of the material that had been his calling-card for years. His fee was 100 guineas – about £1500 today. He died later that year. Chesney Allen died in 1982, having outlived all the Crazy Gang.

Yes, there’s no jazz here, but Flanagan & Allen were in the moment, and their music will resonate with fans of pre-60s popular music.

Click here for 10% off the entire Retrospective catalogue, including this title, using code JJ2020

Discography
Underneath The Arches; Dreaming; Wanderer; Can’t We Meet Again; Hometown; Down And Out Blues;; Music, Maestro Please!;The Umbrella Man; Run, Rabbit, Run; We’re Gonna Hang Out The Washing On The Siegfried Line; F.D.R. Jones; If A Grey Haired Lady Says “How’s Yer Father?; On The Outside Looking In; Are You Havin’ Any Fun?; I’m Nobody’s Baby; Yesterday’s Dreams; Let’s Be Buddies; Round Back Of The Arches; Down Forget-Me-Not Lane; Rose O’day; What More Can I Say?; I Don’t Want To Walk Without You; Miss You; We’ll Smile Again; Why Don’t You Fall In Love With Me?; Two Very Ordinary People; Shine On Harvest Moon (78.36)
Bud Flanagan, Chesney Allen (v) with orchestras led by Henry Hall, Dick Elgin, George Scott-Wood, Robert Munro, Harry Bidgood, Stanley Black, Jay Wilbur and Bert Ambrose. London, 1932-1944.
Retrospective RTR 4366

Footnote from Matthew Wright:
“After reading Gordon Jack’s review of Flanagan & Allen (JJ, 17 June), I can confirm a link with jazz, however spurious. Jazz bassist and bandleader Spike Hughes played charity cricket matches for the Lords Taverners, often against showbiz sides.  As “Mike” he wrote for the Melody Maker and recalled: “One of my proudest cricketing moments is of capturing the wickets of both Flanagan and Allen in one innings. This is undoubtedly a record”.

The Ebony Hillbillies take the tradition of the string band and update it for modern times, keeping the all-acoustic instrumental line-up and bringing it...

Harry Colomby, a gifted teacher of English and Social Studies, taught at high schools in Brooklyn, Queens and Long Island, and died aged 92...

Culturally, there was a lot going on in America after World War II. In classical music, Arnold Schoenberg and Igor Stravinsky had moved to...

Steve Beresford has throughout his adult life cheerfully ignored the boundaries marked and the walls erected around musical types, but irking purists, always a...

The Eternal Triangle is a follow up to the well received Double Take recorded in 1985. Hubbard, now long distanced from purely commercial considerations,...

Flanagan & Allen: Underneath The Arches"This CD concentrates on some of their most popular material. Allen’s bass vocalising, which was more spoken than sung, and Flanagan’s mellifluous baritone created a quite unique charm and blend"
Advertisement