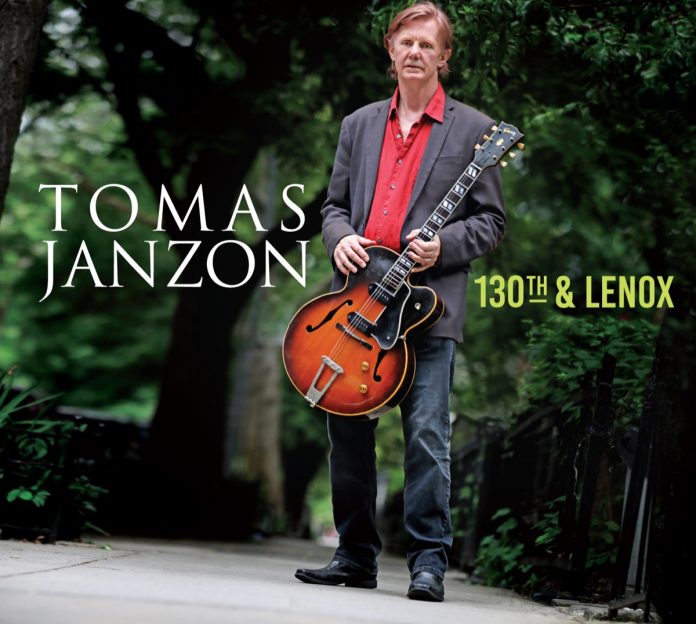 Tomas Janzon is a Swedish, classically trained guitarist. After studying at the Royal School of Music in Stockholm he embarked on his professional career – touring, performing and recording in Sweden and Northern Europe. He then moved to Los Angeles to study with American jazz guitarist Joe Diorio at the Musicians Institute/GIT, where he was awarded Outstanding Player of the Year. He continued to teach there until 2008 as well as writing, recording and touring extensively.

X-Changes was first his recording in 2000, followed by Live In Stockholm (2002), Coast To Coast (2007) and Experiences (2010). 130th & Lenox (named after where he lives in New York) is his latest offering. It started life in Los Angeles in 2017, with Nedra Wheeler and Donald Dean, and was finished in New York in 2019, with Steve Nelson, Hilliard Greene and Chuck McPherson.

The album is a collection of intelligent interpretations of mainly other people’s compositions. Softly As In A Morning Sunrise is by Hungarian-born American composer Sigmund Romberg and Oscar Hammerstein II, from the 1928 operetta The New Moon. This interpretation is almost modal in nature, with a reoccurring note in the middle of a falling line of chords. Janzon’s guitar playing shows his classical training and is articulate and refined. Steve Nelson’s vibraphone makes the ideal accompaniment for what is a polished introduction.

Somewhere Over Stockholm is the first of three original pieces and is inspired by an old Swedish pop melody that kept repeating itself to Janzon. It is a clever piece with bass and guitar playing in unison whilst Nelson is pretty much given free rein on the vibes. Prince Albert, by trumpeter Kenny Dorham, is an uptempo track with plenty of opportunity for the band to express themselves. The pace is fast, and the musicianship impeccable – notably from Steve Nelson on vibraphone.

Latitude Longitude is the second original track from Janzon and consists of an experimentation with two notes pointing in different directions at the same time (hence the title). Invitation is based on a song by Bronislaw Kaper, the Polish film composer, and is notable for its melodic intervals. Beatrice is a Sam Rivers composition and arranged by Janzon in two different octaves; but is played in less of a ballad style than the original by Rivers.

The Rodgers and Hart classic, Have You Met Ms. Jones? gets more than a musical makeover with the change to a neutral title. It is a fast-paced interpretation with plenty of swing. Wayne Shorter’s Iris on the other hand is a slow and delicate rendition with some of Janzon’s best guitar playing on this album.

Hypnagogic (relating to the state immediately before falling asleep) is Janzen’s third and last original contribution. Written around a line of notes running through his head just before he was about to fall asleep, it is an 11/4 arrangement giving plenty of space for both Janzon and Nelson to experiment. Both are supported by some fine drum work from Chuck McPherson.

Monk’s Mood finds Janzon paying homage to the great pianist. Janzon says it was 3 o’clock in the morning and the CD player mysteriously switched itself on playing Monk’s Mood. He saw it as a call to action after several years of playing, writing and teaching – but not recording. This was to be the first session of the new album recorded in Los Angeles back in 2017. With no pianist or wind instruments to call on, Janzon’s guitar had to rise to the challenge of remaining faithful to the original whilst introducing a level of originality at the same time. Never easy with a jazz classic but successful on this occasion.

The Crystal is the last track on the album and has the feel of a talented classical guitarist playing jazz, which, of course, is where it all started for Janzon. The intricate bass playing from Nedra Wheeler reminds me of Ron Carter.

Janzon is not a prolific recording artist. The music he produces, however, is thoughtful and sensitive. Whilst more than capable of composing his own material, his ability to interpret other musicians’ compositions is where his strength undoubtably lies. The fact that Janzon writes and teaches extensively about jazz and classical guitar when not performing, suggests that he is very much a thinking musician.

This may not be an original album in terms of new compositions, but it certainly deserves a listen if intelligent arrangements and well-played jazz guitar grabs your attention.

Previous articleUros Spasojevic: Winter Tales
Next articleChris Burn / Philip Thomas: As If As

Horace Silver was one of many leading American jazz musicians to appear at Onkel Pö, the celebrated Hamburg venue that closed in the late...

Ernest Mitchell Andrews Jr was born 25 December 1927, Philadelphia, Pennsylvania, and raised in Louisiana but while still a teenager his family moved to...

“I was able to dig deeper than before into my musical heritage” says bass guitarist Shez Raja of his current CD Tales From The...

Having grappled with an item from the Listener’s Companion series, I now meet up with the Oxford Studies in Recorded Jazz. Seven titles to...

There are implications here which I cannot fully grasp. What is the significance of Charlie Haden, 30 years after supporting Ornette's revolution, turning up...