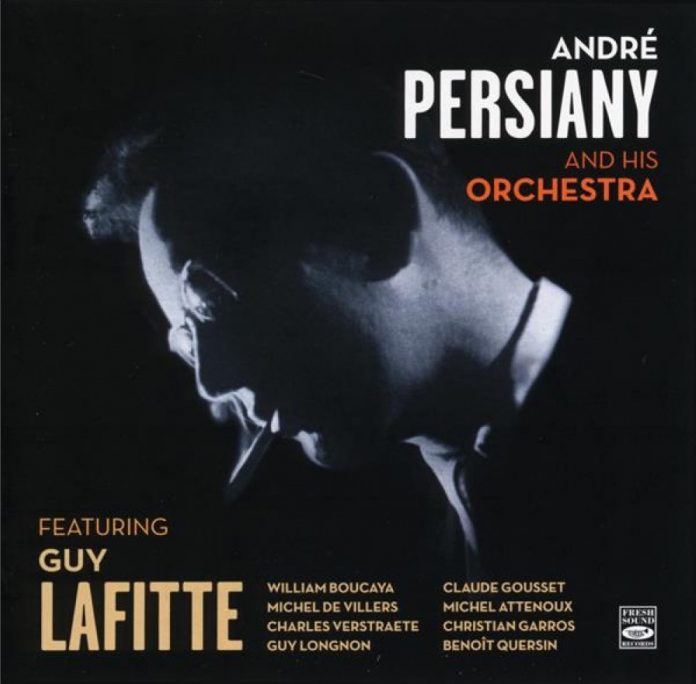 Apart from the admirable Kenny Baker’s Dozen there was no British equivalent to Persiany in the 50s. He was a gifted pianist and arranger, and he led bands where the musicians were fluent and accomplished. His groups were well-rehearsed and so the leader’s charts, imaginative and inventive, succeed well.

The first track shows off a handful of soloists to good effect. The fiery Longon was on leave from Claude Luter’s band and Benny Vasseur had already achieved an eloquence more American than Gallic. Lafitte, not featured as much as you might expect, gets his first display when he digs in, Hawk-like, to Blue Organ. Guy was a most consistent tenorist with a ravishing tone, and he presumably remained so until his early demise at 71. Boucaya is full of bright ideas, and his feature on Lover Come Back is a great introduction to his playing.

André’s writing for the saxes is delicious, as you’ll find on Halbe, Finnts and T-Bone, a sonorous feature for Vasseur. Lafitte does indeed donne la chaude sonoritè (all relevant liner notes are in French) to Christmas Song and gives it a relevance unusual to the Christmas tree and baubles image. Saxes are rampant on Finnts, with de Villers announcing himself as a baritone giant. Longon’s Mamoune is a reflective ballad showing he wasn’t hide-bound by French trad (the sax writing is so good I suspect it was by André.

The (2) band is even better, with Beer Barrel wielding a hefty poke and exemplary bass playing by Quersin behind the leader’s Buckner outing. Although he’s only listed on baritone, I suspect it is the gifted de Villers playing the alto feature on Little Story. He’s back on baritone to split Twelve Bars with an abrasively hostile Lafitte.

The final seven tracks is a batch of Basie, re-conceived by Persiany, with the muscle of an unusually large battalion and his fine arranging skill. Blue And Sentimental has a good alto solo from Attenoux, more familiar for his Bechet-like soprano, and a melodic piano solo before a fascinating conversation between the sections. Attenoux takes it out with some graceful inventions. He also precedes de Villers with more commanding alto on Jive At Five.

André emigrated to New York soon after these sessions, and stayed there for the best part of a decade. He died on 2 January 2004.