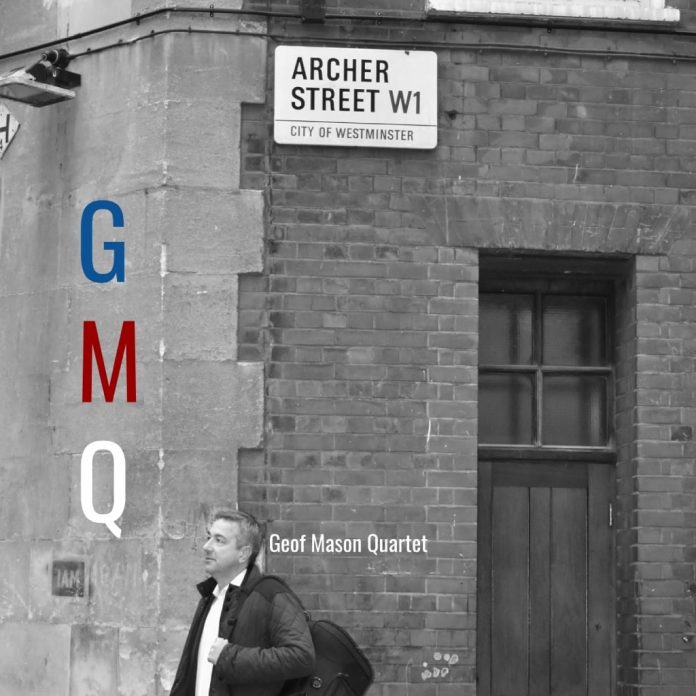 The cover of this CD shows Geoff Mason on the corner where Rupert Street meets Archer Street, the famous back street in Soho which was a meeting point for West End musicians from the 1920s up to the 50s, and the gathering place for members of the (then) modernist Club Eleven. Its character was described in Syd Gamage’s poem:

It’s there the Jazzers congregate,
Who, all dressed up, just watch and wait;
They hang about in threes and fours;
Blocking the Club and MU doors: (Musicians’ Journal, July 1926)

Appropriate, as it points to the style of music on the album – straightahead modern jazz – as well as to the person of Mason himself, a well-respected working trombonist. The material is a mix of familiar and lesser known numbers and each member of the quartet is given the opportunity to solo, each acquitting themselves well.

Pianist John Horler shows what an underrated player he is, with thoughtful accompaniment and a series of inventive solos, on Coltrane’s 26-2 and Monk’s Well You Needn’t in particular.

Mason displays his technical skill throughout and makes a spirited attempt at accommodating the blur of notes on the tricky Trinkle Tinkle, which calls for quick, precise slide technique. Monk’s composition is also a vehicle for a proficient bass solo from Adam King, whilst Horler avoids the trap of being too “Monkish” whilst admirably retaining the tune’s character, before trombone and piano trade fours with the accomplished and dependable Winston Clifford.

An interesting choice is Woody Shaw’s Beyond All Limits, Mason showing mastery in his fast articulation and smooth slur, followed by a round of solos and the rhythm section pushing the tempo along. Two Herbie Hancock numbers are included, Mason’s improvisational ability evident on both, although it’s the simmering Riot with its slightly abstract and dark undertones which impresses.

This is an enjoyable album and it’s to Mason’s credit that he hasn’t settled for easy options and instead has chosen some demanding material to which the musicians respond commendably.

GMQ is available from Apple or Spotify. To find out more about Geoff Mason’s other projects go to geoffmason.uk.

Seventy years ago, the United States Air Force formed a big band named Airmen of Note, although there is nothing dated in what is...

For more than half a century, Betty Bennett, who has died at her home in Southern California, delighted lovers of jazz singing. She was...

"...an enjoyable album and it’s to Mason’s credit that he hasn’t settled for easy options and instead has chosen some demanding material to which the musicians respond commendably"Matthew WrightGeoff Mason Quartet: GMQ
Advertisement