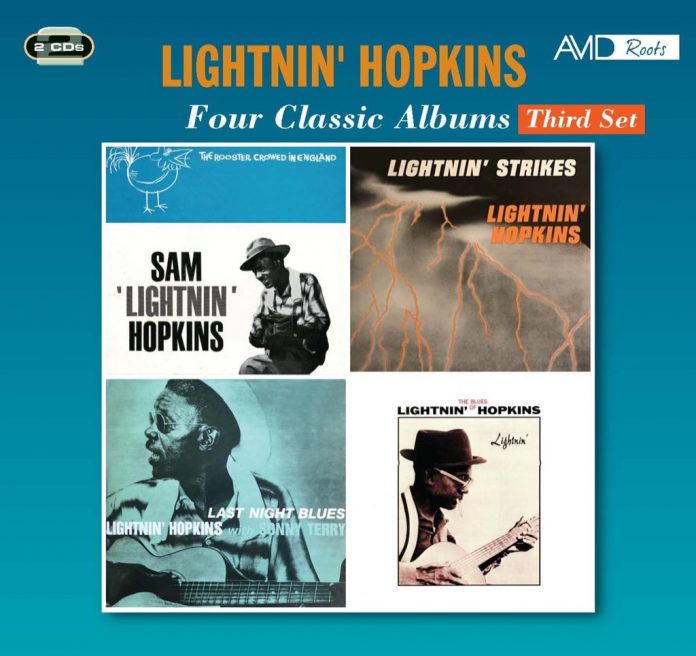 As the title of this two-CD set makes clear, this is yet another package of albums from bluesman Lightnin’ Hopkins. This time, the recordings cover a period from 1954-1962 – two solo, one trio outing and a quartet recording featuring Sonny Terry, and there’s not a weak one in the bunch.

Hopkins was already in his 40s and an experienced performer when he recorded the earliest tracks on The Rooster Crowed In England (Met The Blues At The Corner and Goin’ To Galveston, both showcasing his piano playing). His personality and style come over strongly on this and the slightly later recordings that make up the remaining three albums: a relaxed approach to playing and singing that makes both sound deceptively easy to achieve, a strong and expressive voice, a liking for introductory chat that can shoot off in unexpected directions, and a guitar style that incorporates punchy rhythm and fluid melody (How Many Days Must I Wait is a great example of his guitar and vocal talent).

Last Night Blues is credited to Lightnin’ Hopkins with Sonny Terry. Drummer Belton Evans and bassist Leonard Gaskin add rhythm, as they do on The Blues Of Lightnin’ Hopkins, which was recorded a fortnight later. Both albums were recorded at Rudy Van Gelder’s studio. Terry’s harmonica and spontaneous wails and whoops work well with Hopkins’s guitar and voice to create a dynamic and enjoyable collection.

Lightnin’ Strikes (from 1962, not the album of the same name recorded three years later) is credited as another solo record, recorded back in Houston and notable for most of the songs being credited not to Hopkins but to Lola Anne Cullen and Bill Quinn, who had worked with Hopkins over the years at Aladdin and Gold Star Records and seem to have an amazing knack of writing songs just like Hopkins does.

It opens with Got Me A Louisiana Woman – complete with bass, drums, electric guitars, piano, all uncredited and all struggling at times to keep up with Hopkins’s raffish approach to tempo and song structure. The band return for War Is Starting Again, which fades away mid-verse. Both songs are credited to Hopkins and Semiens, rather than to Cullen and Quinn: Semiens is probably Ivory Lee Semien, a Houston-based drummer. The album’s also notable for using too much reverb, possibly in an attempt to make Hopkins sound more with-it: it’s unnecessary.

There are plenty of songs here about the life of the blues singer, but Hopkins may be unique among his contemporaries in writing a song for Queen Elizabeth II. Blues For Queen Elizabeth is the longest track on these albums by some way, a song in praise of the titular monarch with Hopkins bemoaning the fact “this big world is sinking down,” telling of how the rooster crowed in England and could be heard over in France, then declaring his hope that he can take Mrs Hopkins to England to meet the queen. It’s a fine example of Hopkins’s vividly imaginative approach to songwriting.