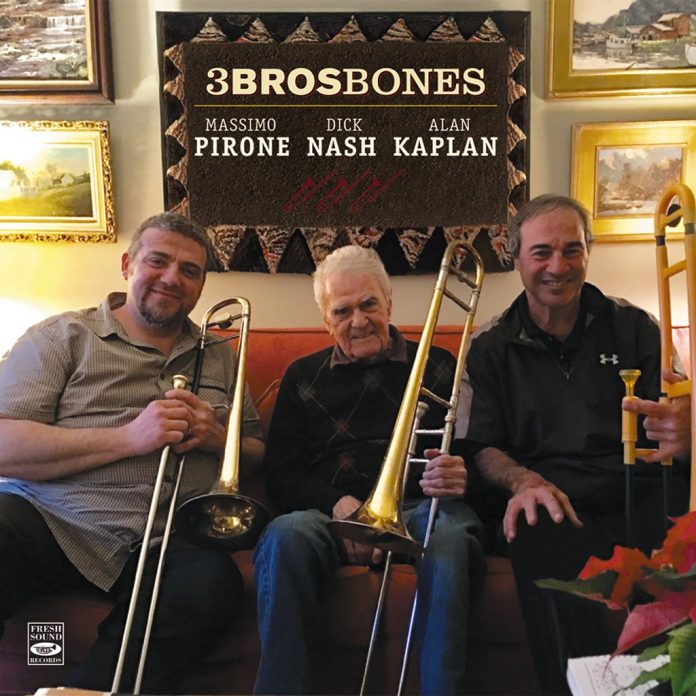 This release will bring back fond memories for those familiar with the JJ Johnson-Kai Winding quintet and octet of the 50s. Massimo Pirone, who is the most heavily featured soloist, has arranged a selection of songbook standards for the date. Much of this material was composed between 1929 (What Is This Thing Called Love) and 1945 (Laura) which was a Golden Age for popular music.

Pirone has performed with Quincy Jones, Lee Konitz, and Bill Holman and doubles here on tenor and bass trombone. Alan Kaplan is one of the top studio musicians in Los Angeles and his recording credits include dates with Sarah Vaughan, Buddy Rich, Harry James and Lionel Hampton as well as nearly 1000 movie scores. The veteran Dick Nash is probably the best known of the 3BrosBones. Ninety years old at the time of this recording he began his career with Sam Donahue back in 1947. After working with Billy May, Tex Beneke and Charlie Barnet he joined the CBS Staff Orchestra in 1957.

Many of the charts are played by two of the three horns often voiced in thirds or in unison the way Jay and Kai used to be. The Nearness Of You – one of Hoagy Carmichael’s loveliest melodies – has Pirone almost at the top of his range playing in a rich, legato fashion worthy of a Tommy Dorsey. Elsewhere he examines the deep caverns of the bass trombone on All The Things, I Remember You and What Is This Thing. He is multi-tracked on both Laura (which probably needed Johnny Mercer’s lyric to turn it into a hit) and Frank Rosolino’s cute Blue Daniel which features an unaccompanied 14-bar trombone soli.

Dick Nash (Georgia, Just Friends and I Remember You) and Alan Kaplan (Emily and All The Things) have some impressive outings too.

Discography
All The Things You Are; Georgia On My Mind; Just Friends; The Nearness Of You; Emily; Mr. Nash; I Remember You; Body And Soul; Laura; The Girl From Ipanema; What Is This Thing Called Love; Blue Daniel (65.28)
Nash, Kaplan,Pirone (tb); Alessandro Bonanno (p); Alfredo Bochicchio (elg); Flavia Ostini (b); Marco Rovinelli (d). Rome, Italy, December 2019.
Fresh Sound Records FSR-CD5061

Nic Jones - 16 March 2019
Just when you’re resigned to not hearing an invigorating blast of new music, this nourishing one comes along.  Ron Caines was a stalwart of the British band East of Eden...

RedGreenBlue: The End And The Beginning