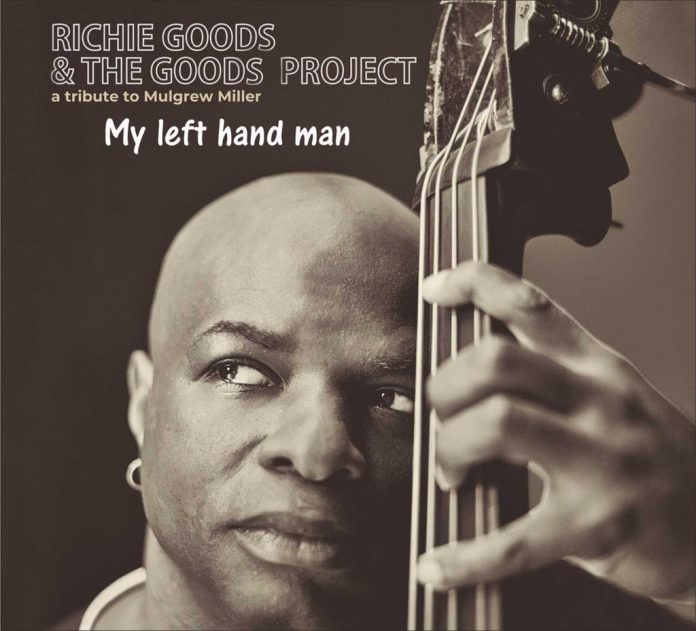 A bit of a curate’s egg here – bassist Goods’ tribute to the late pianist Mulgrew Miller consists of Miller’s compositions, with the exception of the brief title track. It’s a mixture of relaxed, atmospheric grooves, contemporary R&B and high-energy funk. The interplay and arrangements are tight, but there’s the inevitable dull thud of deadened drums.

Eastern Joy Dance has something of the relentless funk approach of Lenny White, drums lacking resonance like someone playing a cardboard box. The leader’s skilful but disappointingly brief solo tribute (Left Hand Man) segues into Know Wonder, in which Shedrick Mitchell’s piano solo, blocked chords and extended runs, is encumbered by busy but muffled drums. Second Thoughts, with Jean Baylor’s vocals – “voice” would be more descriptive, as no discernible lyrics – is reminiscent of the Return To Forever style interlude that comes up when your phone call is put on hold. Gregoire Maret’s harmonica is a welcome diversion on Farewell To Dogma, adding a slightly different dimension.

But then comes The Sage, an attractive laid-back version of Miller’s early composition which benefits from less guitar intrusion, giving Mike King the opportunity to impress with clear and sensitive piano and an inventive solo from the leader’s bass. Dreaming also has greater clarity, featuring Mitchell widely exploring the piano and seamlessly leading into the vibes, the two effectively interweaving before the piano re-establishes the theme. A satisfying track, thanks also to a more interesting and varied undercurrent of drumming.

Two more of Miller’s works from the 80s, Song For Darnell and Saud’s Run, include strings, more convincing on the latter in creating a distinctive riff over which Mitchell produces some soulish, down-home piano. The Sequel sees Goods showing his skill and technique again on acoustic bass, deftly using the whole range of the instrument, followed by rhapsodic piano from King and Tariqh Akoni’s Bensonish guitar.

Overall, the piano contributions stand out when given greater leeway, without fuzzy electronica and rhythmic dullness. Of course I realise this is highly subjective and I’m sure those who follow jazz rock/funk and “progressive” jazz will disagree, but each to their own. The musicianship is of high standard, the leader’s bass impressing in particular, and many of the tracks are enjoyable. But as the jazz club compère in the Fast Show would say … ”Nice”.

Matthew Wright - 30 May 2019
Whilst this album has some familiar material, it has a number of lesser known standards, and is interesting from this point of view. It also benefits from the presence...