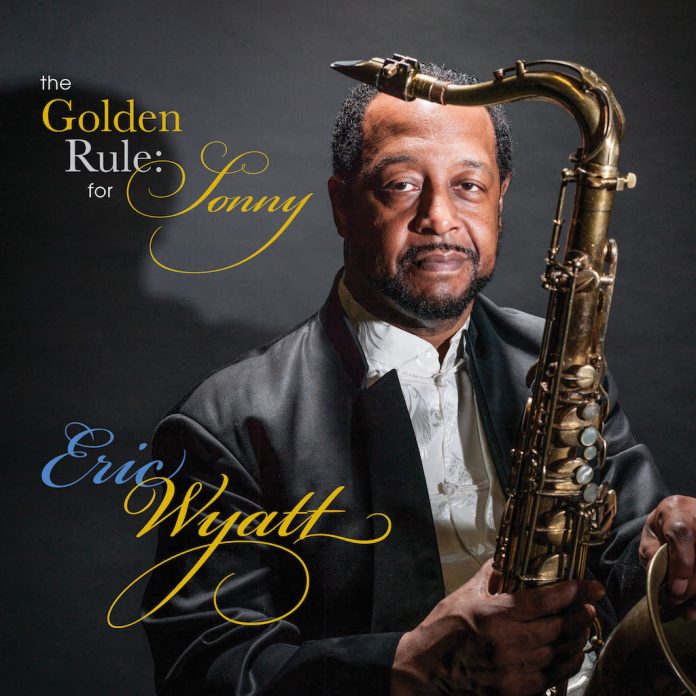 There appears to be some kind of trend towards albums paying tribute to Sonny Rollins. I’ve reviewed two by Stephen Riley (Hold ’Em Joe and Oleo) and now comes this effort from Eric Wyatt. A very different kind of tenorman compared to the softly flowing Riley, Wyatt remembers Rollins as a close friend of his father, also a tenorman, to the extent that the senior Wyatt would join Rollins during those legendary practice sessions on New York’s Williamsburg Bridge.

When picking tunes by Rollins Wyatt chose from all periods. One can hardly avoid the likes of Don’t Stop The Carnival on this type of album (Riley opted for Hold ’Em Joe as his calypso memento), but his other choices are relatively unfamiliar apart perhaps for The Bridge. One of the warmest evocations comes from Wyatt’s interpretation of If Ever I Would Leave You, a standard given the Rollins treatment many decades ago.

It’s not all Rollins. Indeed, the track dedicated to Arthur Rhames commemorates the fact that Rhames, who also played tenor, in effect encouraged Wyatt to veer closer to the style of John Coltrane. There’s an oblique reflection of this in Nubia, a tune written by McCoy Tyner and recorded by Rollins in 1979 – a rare instance of him playing a soprano and with Tyner’s piano heading the rhythm section.

One could almost split the album into two sections, the first largely in the Rollins camp. Even here one finds the Rollins-inspired theme statement of the standard What The World Needs Now leads to a Trane-styled solo. Change creeps in more consistently during After The Morning, written by pianist John Hicks, where Wyatt’s opening fits most of what came before while his solo towards the end is again decidedly in the Coltrane camp. It’s worth noting in this connection that Benito Gonzalez, originally from Venezuela and pianist on most of the tracks, comes across as an obvious Tyner disciple. There are creditable solos also from Giveton Gelin, a name new to me, and from Clifton Anderson, probably best-known for appearing several times with his famous uncle, the aforementioned Mr. Rollins.

For more information or to buy Eric Wyatt: The Golden Rule For Sonny go to ArkivJazz or Amazon

David Sanborn: Anything You Want – The Warner, Reprise, Elektra Years...