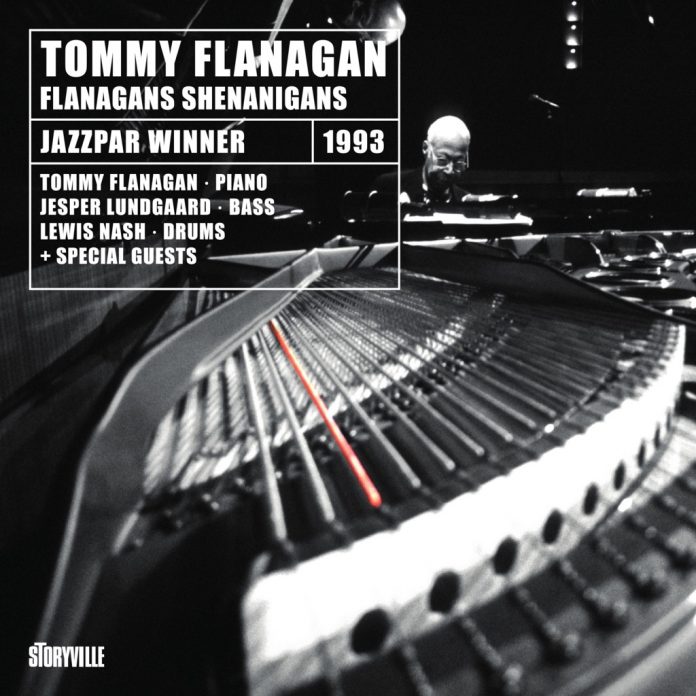 Born in Detroit, pianist Flanagan (1930-2001) was one of that city’s distinguished jazz men. Initially known and admired as an accompanist to Ella Fitzgerald, from the late 1950s he emerged as a gifted soloist releasing a series of benchmark recordings such as Overseas (1957), Solo Piano (1974), The Tokyo Recital (1975), Thelonica (1982) and Jazz Poet (1989). In 1993 he received the Jazzpar Prize of 200,000 Danish kroner, ironically sponsored by the Scandinavian Tobacco Company and awarded by the Danish Jazz Centre, which later allowed him to afford a heart by-pass operation. Like all honourees – including Martial Solal and Django Bates – he directed and participated in a concert with his trio plus the accomplished Jazzpar Windtet sextet, and Danish tenor saxophonist Jesper Thilo – a Jazzpar winner in 1991. This welcome reissue is one of Flanagan’s best “live” recordings and can only enhance his posthumous reputation.

The performances with the Danish Windtet, with arrangements by Ole Kock Hansen, leader of Denmark’s Radio Big Band, present Flanagan in his element playing three of his own compositions – Eclypso, Beyond The Bluebird and Minor Mishap. On the first title, Nilsson contributes a well-crafted solo, and Beyond The Bluebird has a joyous Flanagan quoting from Parker’s Mood. Minor Mishap features trumpeter Henrik Bolberg Pedersen and tenorist Uffe Markussen.

The remainder of the concert features Jasper Thilo in a rhapsodic rendition of Quincy Jones’s tribute to Lena Horne and husband Lennie Hayton (given its first recorded outing by the Basie band in 1958). It is followed by relaxed renditions of Let’s (a Thad Jones piece) and Jimmy Van Heusen’s But Beautiful. Even the dreadfully titled Flanagan’s Shenanigans (composed by pianist James Williams), with Jasper Lundgaard and Lewis Nash, turns out to be a sprightly and enjoyable piece. In closing, Flanagan introduces a request for Dizzy Gillespie and Chano Pozo’s Tin Tin Deo as a number “we were too well raised to refuse”. The longest track on the album, it lilts and swings from start to finish, much to the audible appreciation of the audience.

With excellent sound, cogent liner notes by Brian Priestley, and colour photos by Jan Persson, this is an appropriate memorial to a sometimes underrated pianist, composer and arranger. At the end of the concert, a sincerely modest Flanagan says that he is “very proud to receive this [JAZZPAR] award” and mischievously expresses the hope “that it might spread to lands like the United States”.