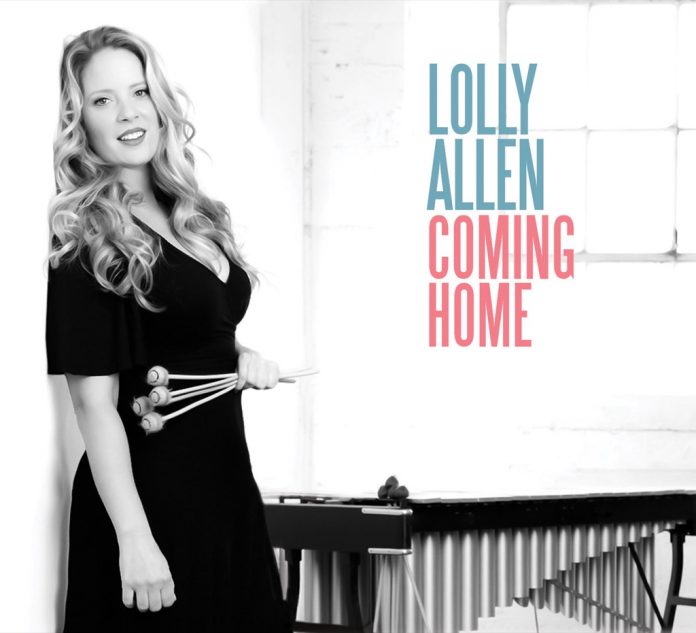 Ask any jazz enthusiast for the names of female vibes soloists and they will probably come up with Margie Hyams, maybe Terry Pollard and then scratch around for a few more names. Well, here’s another one to add to the list: Lolly Allen. Allen has assembled a band of top-flight California jazz musicians to produce a lively, swinging bop programme that should suit most enthusiasts down to the ground.

Her opening selection, The Hippest Cat In Hollywood, allows her to map out a series of light, almost frivolous choruses on vibes on Horace Silver’s snappy line. Drummer Kendal Kaye and bassist Jordan Richards are solid in support along with Josh Nelson on piano. Danny Janklow on tenor gets to blow a little too. Coming Home, the title track, is one of two compositions by Ms Allen and fits well into her programme, starting with s slow, lyrical introduction on vibes and then cruising into a medium-tempo workout for the quintet. Little Hummingbird is her second piece and it flows along attractively with the vibes front and centre throughout.

There is music on offer here by Johnny Mandel, Jobim, Dizzy Gillespie and Luiz Bonfa which gives Lolly the opportunity to demonstrate her prowess on bop, Latin and, perhaps best of all, slow ballad playing on a classic composition. The version here of If You Could See Me Now is taken at ultra-slow tempo and gives the leader the chance to stretch out over an extended solo where she is most lyrical and inventive. If the music is good enough and the soloist imaginative enough it is still possible to come up with fresh variations even on as well-worn a theme as this Tadd Dameron classic. Josh Nelson’s tasty piano solo and accompaniment helps to make this the standout track of the session. Mambo Inn and O Grande Amor by Jobim prove that Lolly is equally at home in the Latin-jazz arena.