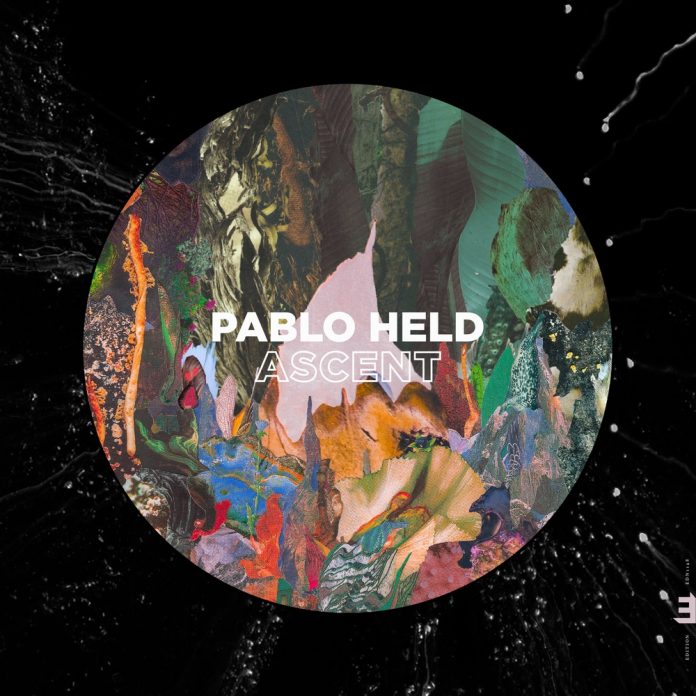 Following their brilliant 2018 Edition Records debut, Ascent marks something of a departure for the Pablo Held trio in as much as it introduces a fourth instrumental voice to the mix. Anybody seeking to enter such a cloistered space has to be both a consummate communicator and a damn good listener, and fortunately Brazilian guitar virtuoso Nelson Veras meets both criteria with ease.

A seasoned performer now based in Europe, Veras has recorded and performed with Steve Coleman, Aldo Romano, Harmen Fraanje and Magic Malik amongst many others. His style fuses techniques drawn from contemporary jazz, classical and Bahia traditions, and in the context of this collaboration perhaps the greatest compliment I could pay is to say that he simply slots right in.

Opening with the rather blocky and percussive Unlocking Mechanism, Landfermann bends the form to breaking point as Held embarks on the first of many impassioned flights. Veras feels his way to the foreground, his soft chordal chimes slowly giving way to a volley of angular crossfire. Dikkedeo is another of those wonderfully elliptical Held ballads, and Veras’s delicately shimmering textures bring a pleasing lustre.

Poem #6 is another piece from Held’s father Peter, the latest in a series of homages which began on the 2014 album Elders. Its complex theme takes numerous twists and turns before Held and Veras branch out, and of all the pieces on Ascent it is the one in which the trio’s great debt to Evans-LaFaro-Motian is most strongly felt.

Another striking feature of Ascent is the extent to which Held embraces the potential of the studio. Forest Spirits inhabits an almost otherworldly space, accentuated by the spectral voice of Morscher and the electro-acoustic timbres of Viner’s clarinet. The pulsating title-track conceals a number of delightful surprises as it shifts through the gears, while Musica Callada #24 (Mompou) and Excerpt From Piano Concerto #4 (Rachmaninoff) extend the “comprovisational” approach first heard on 2015’s Recondita Armonia.

All told this is a beautifully nuanced set, and Veras is a true simpatico player who gives the trio some exciting new options. Whatever the future may hold for this collaboration, and I hope it doesn’t stop here, Ascent ranks amongst Held’s very best work to date.