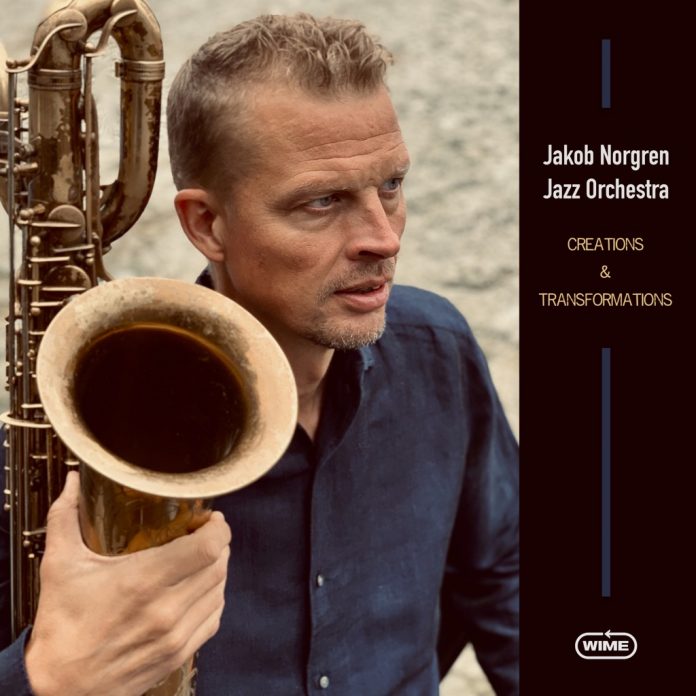 Saxophonist, bandleader and composer Jakob Norgren has been recording with various large outfits for 15 years now. His first album Wide Meadow Soul (Wime, 2005) was recorded with his soul/jazz/blues troupe Big Band Splash. Creations & Transformations is his sixth album to date, this time with a newer, eponymously titled Jazz Orchestra. Norgren, who hails from Stockholm, has produced a classy record which deserves fulsome praise for several reasons.

The opener, Crazy, was an unlikely but memorable hit for Gnarls Barkley in 2006. It’s here given a very attractive, muscular treatment, the lower-registered instruments (baritone sax, bass trombone, sousaphone) coming into their own. Out of the eight tracks, four are Norgren originals and the meaty timbre is continued on numbers like the 12-bar Holen Blues and additionally demonstrates Norgren’s aptitude for clever arrangements and some mean baritone blowing too.

But ultimately the most interest is piqued by the choice of covers. There are four in total and arguably the weirdest but most engaging is Rodgers and Hammerstein’s The Sound Of Music, which begins in a deconstructed format but eventually reverts to a more conventional chart. Another pop tune rarely heard in a jazz context is a lush version of the Wham! hit Careless Whisper from the album Make It Big (Epic, 1984).

The fourth non-original is a breezy take on Daryl Hall & John Oates’ I Can’t Go For That (No Can Do) from their album Private Eyes (RCA, 1981) which actually featured an alto saxophone solo by Charles DeChant. The final number on the album, Pathfinder, another Norgren title, was recorded live in concert in 2016 but is so consummately executed that it sounds like a studio recording and only the rightly appreciative applause at its conclusion betrays its derivation.

Creations & Transformations is available on CD directly from Jakob Norgren’s website, where you can also read about his other projects. The album is also available on Spotify and iTunes.

Steve Voce - 07 May 2019
How a sensitive and tasteful musician like English bandleader John Cox wound up with such a tasteless nickname is a mystery. His interests always lay in modern jazz and,...