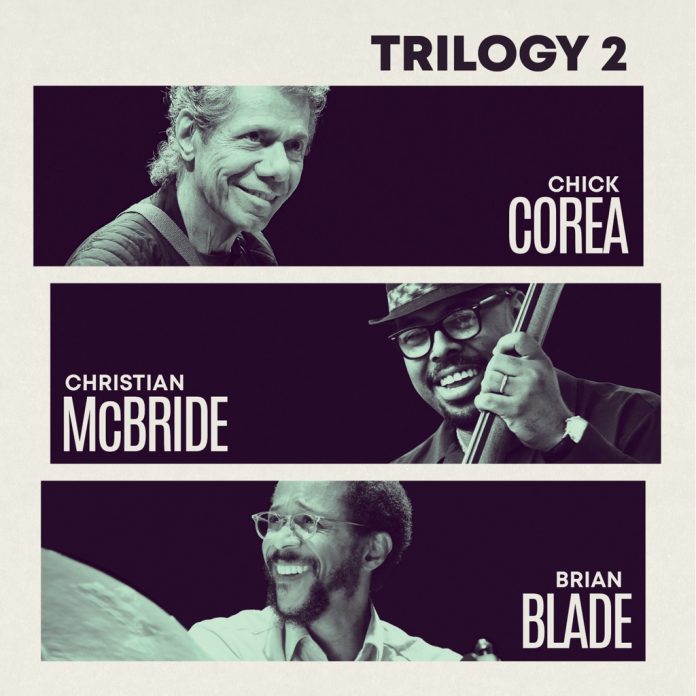 Chick Corea won two Grammy Awards in 2014 for his much-acclaimed Trilogy triple CD, the concentrated distillation of two lengthy world tours and multiple concerts with his trio, featuring bassist Christian McBride and drummer Brian Blade, and whom Corea introduces on the latest release, as “my genius partners”. The album showcased the group on magisterial form, and was a stand-out release in this reviewer’s Critics’ Poll of 2017. The subsequent demand for a follow-up has resulted in a new double album of more recordings with this trio from the same 2010 to 2016 period.

This new release provides a seamless and welcome continuity with its forerunner, comparable in quality and spontaneity. It deserves to stand as a worthy companion. Of the 12 tracks, three are Corea originals – 500 Miles High, La Fiesta and Now He Sings, Now He Sobs, which edges it as my favourite of all the cuts here. Each are given extended workouts by the soloists, proving once more the age-old axiom – once a great tune, always a great tune.

As with the earlier CDs, which showcased his breadth of interpretive acumen, the pianist, right at the top of his game in his late 70s, thrillingly shows how to take a standard and reinvent it in his own image. The Thelonious Monk songbook is a case in point. Here he reprises a slow and spikily accented Crepuscule With Nellie, then segues into a fast-tempo swinging rendition of Work, featuring great work again by Blade, and an interesting counterpoint for Monk buffs to the version from the previous CD. Irving Berlin’s How Deep Is The Ocean? opens the set and its contrastingly more fluid rhythm arrangement, deliberately less reflective and lighter on its feet, adds further layers of complexity to the tune’s endless possibilities.

The trio continues in this exhilarating vein in the opening cut of CD2, Steve Swallow’s Eiderdown, featuring another among many fine McBride and Blade solos. Miles’s All Blues shows the group at its most assertive and effervescent best, delighting in its transformation of the reflective modal blues of 1959 into high-tempo changes. Sixty years on, this version is good enough to stand shoulder to shoulder with Davis’s original – the live ovation says it all. By contrast the one cut which, for this reviewer, doesn’t quite convince in its make-over, even by such celebrated master musicians, is a cover of Stevie Wonder’s Pastime Paradise – in spite of a delightful McBride arco solo. I found myself returning to Wonder’s 1976 Songs In The Key Of Life to remind myself why this was song so integral to, and quite possibly contextually inseparable from that album. The sunlit uplands of Joe Henderson’s Serenity and a high-octane hard-bop rendition of Kenny Dorham’s Lotus Blossom close the set in an upbeat mood.

Chick Corea devotees will not be disappointed by this further exposition of great improvised music-making by one of the finest trios in contemporary jazz.

Brian Payne - 07 September 2021
The music on this album was recorded by Blue Note’s Rudy Van Gelder in February 1954 during a live performance in New York’s Birdland jazz club. It wasn’t meant...