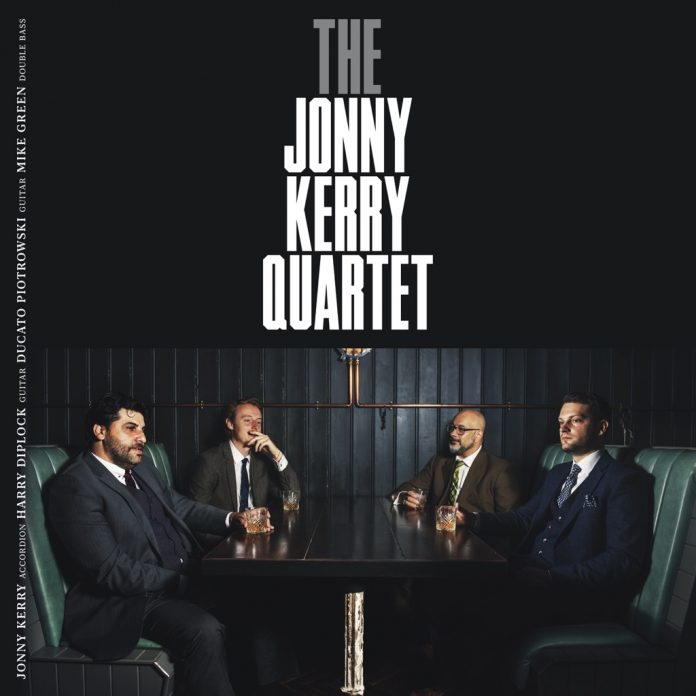 Adding an accordion to a manouche-style band has a certain piquancy in view of the music’s Franco-Belgian origins. It evokes Parisian thoroughfares and pavement cafés just as a clarinet in some settings echoes Jewish klezmer. The combination of clarinet and accordion would be even more redolent of a French street demotic, and an accordion alone pulls in tango elements.

Without a violinist – or a clarinettist – the Jonny Kerry Quartet as advertised on this CD relies on the leader’s accordion and the guitars of Harry Diplock and Ducato Piotrowski to carry the main arguments. It’s to Kerry’s credit that the combination varies a genre often mired in tradition. He is evidently aware that Django Reinhardt and his heirs have simply given a European twist to 1930s swing.

The suggestion of no violinist has to be qualified. No mention of him on the CD cover, but USA session musician Jason Anick pops up on the opening Manouche and the final Waltz For Vera. Both charts are Kerry’s, two of six on the album. And what’s this? Kerry plays piano – again no accreditation – on the penultimate and final tunes, the former also featuring the leader as vocalist. He sings, too on What A Difference A Day Made (or “Makes” – they seem to be interchangeable).

The album is enjoyable for the way Diplock and Piotrowski bring different styles to the lead guitar parts, the former more “international” and employing electrics on Polka Dots And Moonbeams (and not with the often over-stuffed sound of an electrified Django). His colleague imparts a QHCF feel, as he does with both head and solo on Joseph Kosmo’s Claire De Lune, a “lazy river” feature with everyone bouncing later behind Mike Green’s bass solo. It’s also good to see a lack of elbowing among the burden-carriers, each of whom allows the other to go his own virtuosic way.

Kerry lists classical, tango, and Galliano-type “New Musette” as other influences on the band. These lift the music out of what can so easily be a predictable channel.

Steve Voce - 29 March 2019
Artie and the band broadcast regularly throughout 1939 from New York’s Hotel Pennsylvania, which is no doubt why these two broadcasts from there sound very much like another day...