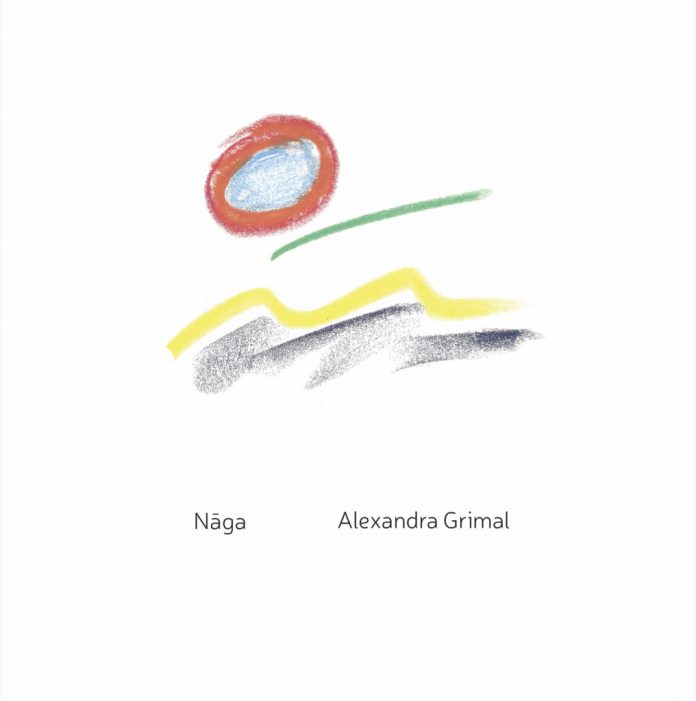 It seems hard to believe that French saxophonist and composer Alexandra Grimal has been recording for just a decade. An established fixture on the European improvised music scene, she is perhaps still best known for the productive two-year spell in New York that led to the recordings of Owl’s Talk with Konitz, Peacock and Motian, and Andromeda with Todd Neufield, Thomas Morgan and Tyshawn Sorey. She’s comfortable in a variety of milieus, and her recent projects have included an intimate improvised duet with Joëlle Léandre, the relatively straightahead trio with Sylvain Daniel and Eric Echampard heard on kankū, and a host of multi-media works commissioned by major European festivals.

Nāga is her seventh release as leader, and seven is clearly a number that holds special significance. In Buddhist traditions the Mucalinda Nāga is the seven-headed dragon serpent which protects the Buddha, and perhaps unsurprisingly Grimal’s ensemble is a septet. Originally created for Jazzdor in Strasbourg in 2014, the seven pieces of Nāga feature texts written and performed by Cassiers and Grimal, and the music often blurs the lines between free improvisation and structured composition.

The lyrics of opening track Inti offer a somewhat pessimistic call to spontaneity, but there’s a wonderful lightness to the articulation of Grimal and Cassiers that recalls the great partnership of Steve Lacy and Irene Aebi. Meltemi builds from an unpropitious murmur, its complex melodic line gradually emerging as Grimal’s dusky tenor asserts its authority before finally dissolving into a netherworld of abstraction.

Noun harbours some captivating interplay from Dumoulin and Cassiers, while Rê runs the full instrumental gamut before climaxing in one of Ducret’s glorious distortion-drenched soundscapes. Disc two opens with the near sacred intro to Sekhmet, hushed vocals backed by gentle acoustic guitar before Grimal’s searching soprano succumbs to the impending maelstrom. Perseus is a small jewel, a spare and very poetic tone poem, while the exotic North African airs of Cambium carry the seeds of one final violent release.

A substantial work laced with many thrilling twists and turns, Nāga should satisfy all but the most demanding of listeners.