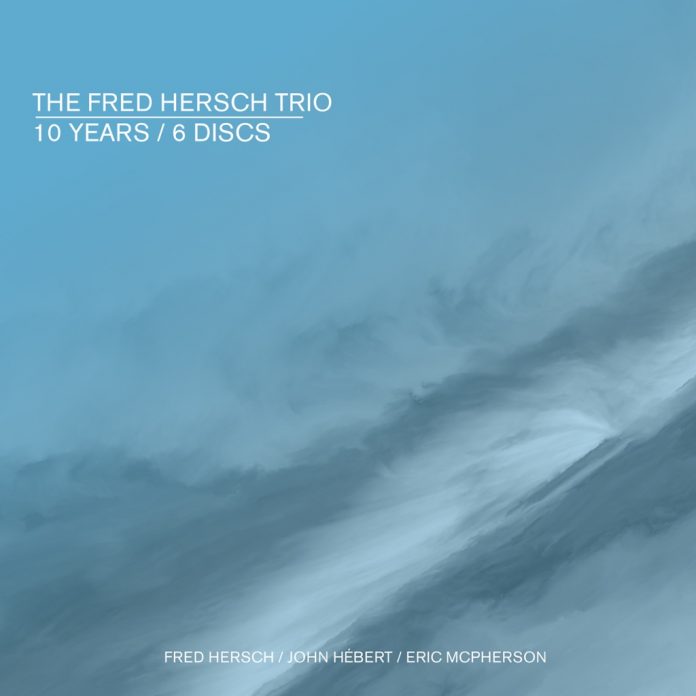 Pianist and composer Fred Hersch is often compared with Bill Evans but he has a distinctive style all of his own. He played with Art Farmer and Joe Henderson in the late 70s/early 80s and since then he’s made over 50 albums as either band leader or co-leader. These have been as solo pianist and in duos with the likes of Jim Hall, Bill Frisell and Norma Winstone as well as in various other combinations.

His trio with bassist John Hébert and Eric McPherson on drums was formed in 2009 and voted Best Jazz Group in Downbeat’s 2019 Critics Poll. Issued to celebrate the trio’s 10th anniversary, this box set comprises the band’s complete Palmetto recordings and documents their musical progression from inception to date. Six CDs, spanning two studio and three live recordings at New York’s Village Vanguard, reveal the development of the band over the decade.

Their first album Whirl, released in 2010 during Hersch’s recovery from an Aids-related coma, is relaxed and intense in almost equal proportions. Interestingly, Hersch had only learnt Paul Motian’s Blue Midnight seven days earlier when he’d played it in a performance with him one night. After extensive touring, Hersch’s trio released Alive At The Vanguard in 2012. It’s heard here on discs two and three and has adroit arrangements of Rollinson, Coleman and Monk numbers together with American Songbook and Hersch’s own compositions. The track Tristesse is Hersch’s tribute to Motian who’d died the year before.

The sense and feel of the music in the trio’s 2014 album Floating is aptly described by its title. Of the 10 tracks, seven are Hersch originals, two are standards and the last is an arrangement of Monk’s Let’s Cool One. Hersch almost always closes his live performances with a Monk number and five of the six CDs here follow that pattern. 2016’s Sunday Night At The Vanguard was the band’s second recording at the club and it’s interesting to compare the trio’s growth in self-assurance to their earlier gig after accruing four years of playing together. The 2016 album delivers the entire first set in the order played at the Vanguard with two additions from the second set. The track Newklypso is in honour of Sonny Rollins, described by Hersch as his “all-around jazz hero”. Hersch’s view of the trio’s 2016 performance is that they “captured lightning in a bottle” on the night in a way that’s impossible to get in a studio.

The sixth CD, Live In Europe, was recorded in Brussels in November 2017 when the trio were performing their penultimate gig of a three-week European tour. Two of the tracks, Mikayo and Black Nile, are arrangements of numbers by Wayne Shorter – another of Hersch’s heroes. Two are Monk arrangements and the rest are Hersch originals. The band is in top form here and the acoustics are first rate.

This impressive collection of albums aptly chronicles the trio’s creative output over the past 10 years. A minor gripe I have is the packaging – I assume it must be an economy to save on cardboard but the sleeve provided is much too tight to accommodate six CDs – I needed tweezers each time to extract the first one.

Discography
CD1: [Whirl] You’re My Everything; Snow Is Falling; Blue Midnight; Skipping; Mandevilla; When Your Lover Has Gone; Whirl; Sad Poet; Mrs. Parker Of K.C; Still Here (56.10)
CD2: [Alive At The Vanguard 1] Havana; Tristesse; Segment; Lonely Woman/Nardis; Dream of Monk; Rising, Falling; Softly As In A Morning Sunrise; Doxy (58.03)
CD3: [Alive At The Vanguard 2] Opener; I Fall in Love Too Easily; Jackalope; The Wind/Moon and Sand; Sartorial; From This Moment On; The Song Is You/Played Twice (57.47)
CD4: [Floating] You & The Night & The Music; Floating; West Virginia Rose; Home Fries; Far Away; Arcata; A Speech To The Sea; Autumn Haze; If Ever I Would Leave You; Let’s Cool One (58.38)
CD5: [Sunday Night At The Vanguard]: A Cockeyed Optimist; Serpentine; The Optimum Thing; Calligram; Blackwing Palomino; For No One; Everybody’s Song But My Own; The Peacocks; We See; Solo Encore: Valentine (68.01)
CD6: [Live In Europe] We See; Snape Maltings; Scuttlers; Skipping; Bristol Fog; Newklypso; The Big Easy; Miyako; Black Nile; Blue Monk (63.58)
Hersch (p); John Hébert (b) Eric McPherson (d).
Palmetto, no number

Derek Ansell - 12 August 2020
Produced for release in 2019, the 100th anniversary of the birth of Nat Cole, this comprehensive 10-LP set will appeal to many jazz enthusiasts. Resonance Records have produced a...