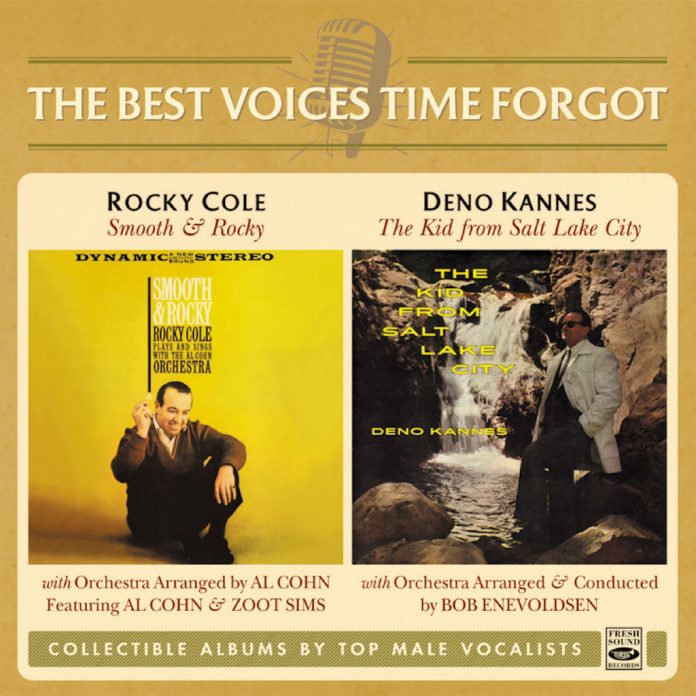 Having covered at least four female vocalists in the Best Voices Time Forgot series I now find that the boys haven’t been forgotten. Rocky Cole is certainly an impressive jazz style singer and I must admit that I had never heard of him, or Mr. Kannes, until this CD arrived in the post.

Cole has a big, ripe voice and uses it well to phrase and swing easily with a biggish jazz orchestra. Al Cohn, Zoot Sims, Frank Socolow and Steve Pearlow are well featured as a version of the famous Four Brothers. There are some good brass and rhythm players too but they are not listed here. Certainly they provide ideal, kicking support for Cole as he improvises his way through a dozen hardy standards.

Cole is a natural jazz performer and bends the notes frequently to suit the jazz readings. He is also an impressive jazz pianist and plays a couple of instrumentals here with support from the rhythm section. The voice is very well employed though even if he is sometimes a little eccentric in his pronunciation. Just listen to him singing Little Gur-ul. I Can’t Get Started is an excellent jazz vocal and also benefits from a floating Zoot Sims solo.

Mr. Kannes is more in the swinging crooner stable and is billed on the liner as following the Frank Sinatra, Jackie Paris tradition. The voice is intimate and he uses it well on his particular choice of 12 standards. He is most effective and convincing on the lesser battered standards such as Why Try To Change Me Now and Oh You Crazy Moon. He was treated to a top West Coast combo featuring Bob Enevoldsen on valve trombone and Howard Roberts on guitar.

Both of these singers are worth hearing and both at the top of their games on this CD. It does, of course, raise the question of whatever happened to them after these debut discs but I suspect, that like the ladies, they were dropped after the rise and rise of Elvis Presley, Fats Domino and the rest of the rock brigade.