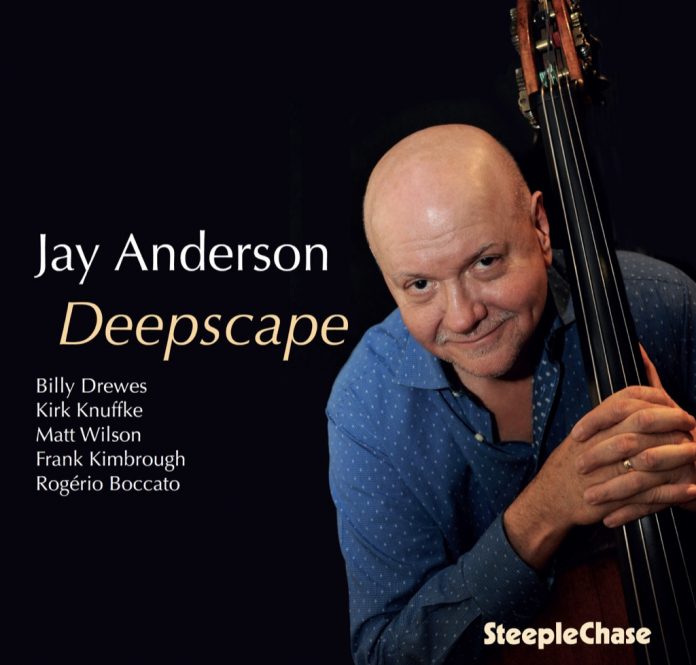 Recently I’ve written about two bassists, Anderson and Andersen – with the former (Jay) featuring on two CDs. (No sign yet of Reid Anderson.) His 92nd appearance on SteepleChase – I’m not sure if his appearance with Vic Juris, reviewed separately, is his 91st or 93rd – showcases Jay Anderson as leader.

Anderson took up the acoustic bass as a pre-teen, and straight out of school, worked with the Woody Herman Orchestra. However, he’s released only two recordings as a leader, both a while ago on DMP: Next Exit (1992) and Local Color (1994).

The 11 selections on Deepscape are presented with varying groups from solo to quintet, in a diverse range of styles. Keith Jarrett’s Shades Of Jazz and Southern Smiles touch on the swing-gospel feel of the pianist’s 1970s quintet – but Anderson’s piano-less format brings out Jarrett’s Ornette Coleman side. I wish more musicians would address Jarrett’s fine compositions. In fact, Anderson is unusual in picking great compositions by other jazz musicians – Gil Evans (Time Of The Barrucudas is a standout) and Branford Marsalis (The Mighty Sword – a quite recent piece).

Billy Joel’s And So It Goes gets a long, moving solo bass exploration, and Anderson also shows an unusual affinity for the classics as he reworks a movement from Morton Feldman’s Rothko Chapel – jazzing the classics doesn’t usually extend to this composer.

Other fine tracks include Jim Pepper’s Witchi-Tai-To, a surprisingly funky Sweet And Lovely, and a haunting duo version of Tennessee Waltz for bass plus Frank Kimbrough on harmonium. The result is an eventful, novel, original and adventurous album.

Steve Voce - 04 March 2020
The power and imagination of the musicians on the New York All Stars’ first album of 2017 surprised and delighted me, and I noted Eric Alexander as an outstanding...