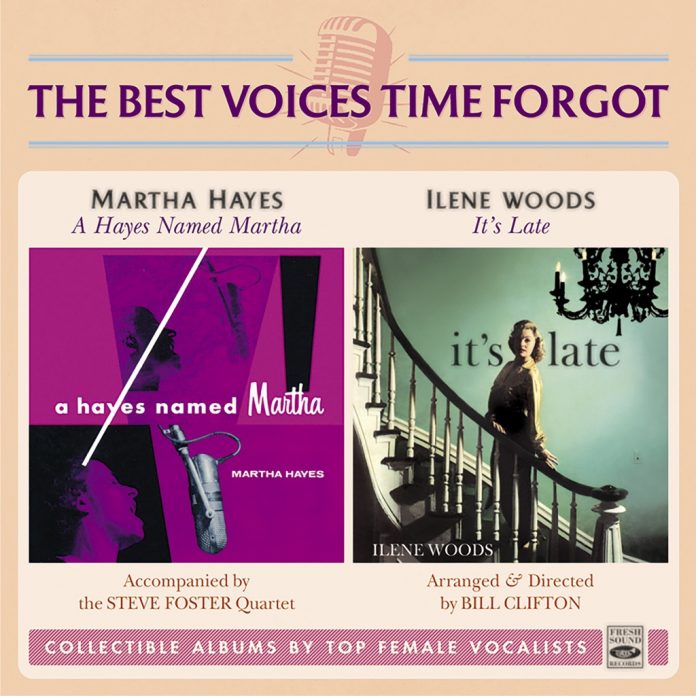 Jordi Pujol at Fresh Sound deserves credit for his many services to fans of jazz singing old and new and in particular for the series The Best Voices Time Forgot, of which this CD is an example.

Martha Hayes performed as a singer-pianist in clubs in the early and mid-1950s and also studied at Juilliard and with Hall Overton. Drawing upon the Great American Songbook for her repertoire, she delivers admirable interpretations of standards, which have, perhaps, become overused in the 60-plus years since this recording. That said, her approach to the material is lively and thoroughly engaging, her vocal sound youthful yet assured, and she sings with a lithe swing.

Accompanied ably by the Steve Foster Quartet, Hayes delivers relaxed and thoroughly engaging interpretations of nine well-known songs. Some of the titles are familiar to us through what have become well known, even definitive performances – for example, Peggy Lee and Fever, Billie Holiday and Good Morning, Heartache – and it says much for the quality of this singer that her versions are by no means outclassed. Speaking of Holiday, there are several moments when she comes to mind, not through any attempt at imitation, but rather through the singer’s style. Ira Gitler’s original album notes are included and serve as a lesson for those of us who strive to write on the subject of jazz singing.

The second album included on this CD brings back into the spotlight another talented singer from the 1950s. Although, that said, perhaps Ilene Woods is better known today than many might suspect even if her name rings few bells. Back then, singers who appeared on motion-picture soundtracks were rarely, if ever, credited and hence remained unknown. In this instance, Woods provided the singing voice for the title character in Walt Disney’s 1950 classic Cinderella.

Her vocal sound is true and always melodic, her diction crystal clear, and while not a jazz singer she is a very good interpreter of classic popular songs. On the evidence of this, which appears to be the only album Woods recorded, she is on par with some of the better-known names of the era. Indeed, she merits more attention than some who sang on through later decades. Sadly, that was not for her and by the 1970s she had changed direction to become a portrait painter. The arrangements are uncomplicated with a few interpolated solos. About the original album notes for this set, which are also here, perhaps the less said the better.

The two LPs were released as, respectively, Jubilee JLP 1023 and JLP 1046. Ilene Woods died in 2010, but so far I have been unable to discover what became of Martha Hayes.

Fred Grand - 19 February 2022
Looking back at the first 20 years of the Helge Lien Trio, it’s hard not to be struck by the pianist’s sure-footed evolution. Starting out as a talented post-Evans...