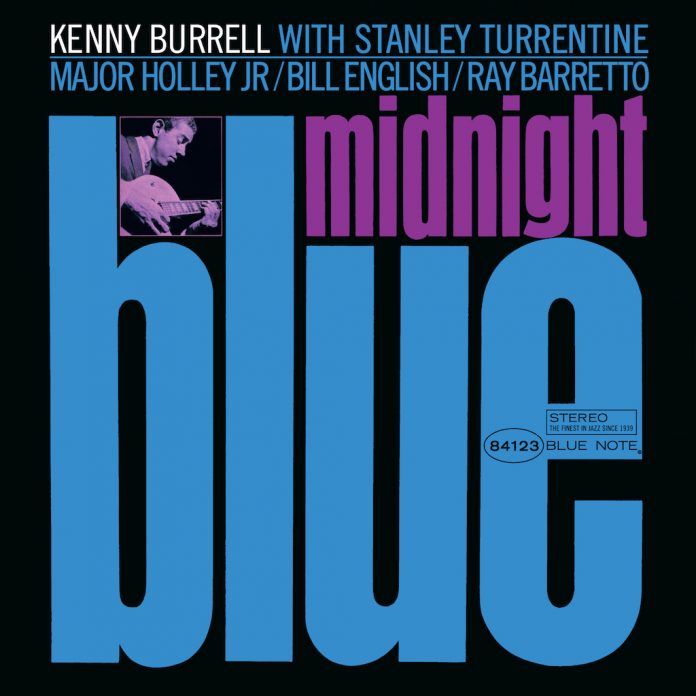 This session represented something of a departure for Blue Note in that regular recorder Burrell went to Alfred Lion and told him he wanted to do an all-blues record with no piano. Burrell chose a solid blues bopper in Stanley Turrentine, just making a name for himself at the time, to share the front line and behind them Major Holley’s bass, Bill English on drums and Ray Barretto on conga.

Listening to the first track, Chittlins Con Carne, it’s immediately apparent that it works well; a new approach to some very old forms. Kenny is immediately in his element with a relaxed and bluesy bop solo, followed by Turrentine, full of slurs, calls and basic blues-based bop licks as the rhythm section purr gently but effectively in the background. English and Barretto are not competitive but rather work in tandem to ensure a near perfectly paced, quietly throbbing rhythm. The rhythm goes up one notch on Mule, the nickname of Holley, as he provides a solid vamp to begin and keeps it flowing for the leader’s deep-blue solo that follows.

Soul Lament is solo Burrell and here he seems to be playing call and response with himself, playing questioning blues licks and replying in kind. One of the modern jazz world’s most accomplished guitar stylists, Burrell is on great form here, in his prime. Kenny is the main soloist on the solidly grooving Midnight Blue that is also enhanced by the laidback but effectively thrusting rhythm section. It’s likely that this band performed as well as they did in the studio partly because English and Holley were part of Burrell’s regular combo that had recently played at the Five Spot Café in NYC.

Wavy Gravy builds blues choruses steadily, with increasing intensity, and there is a warm version of Gee Baby Ain’t I Good To You that features a standout solo from the leader. Saturday Night Blues is a throbbing rocker of a track with both Turrentine and Burrell on top solo form. This LP, in the Blue Note Collection series, states on the label sticker that it is 180-gram, virgin vinyl of audiophile grade. No reason to question that as this is one of the best sounding, most silent vinyl discs I’ve ever heard. It is good to have it back in circulation in this format but it is a limited edition so may not be around for too long.

Brian Morton - 25 May 2020
Ephemerals went through an early phase as an out-there soul band before exploring Alice Coltrane’s legacy and then re-emerging as a highly eclectic outfit, embracing spoken-word, psych, and soul...