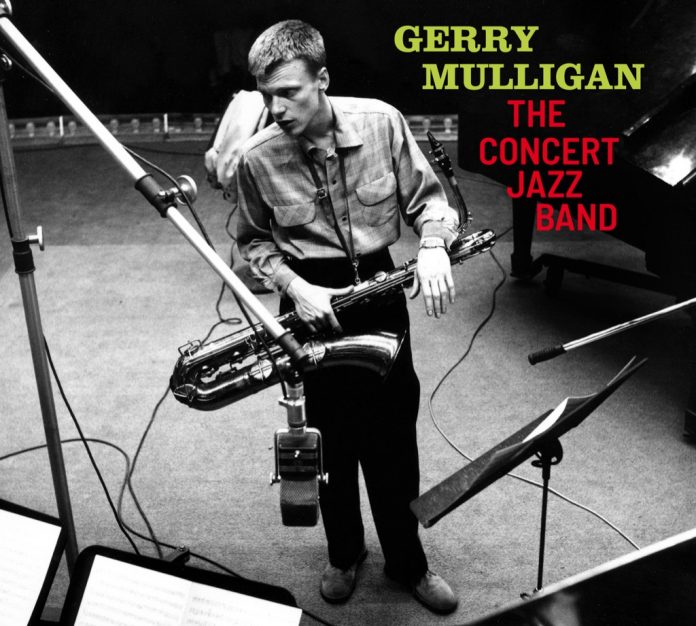 The Concert Jazz Band was the culmination of Gerry Mulligan’s fascination with the idea of bands that were were not-quite small and not-quite big. It began in 1949-50 with the nine-piece group under Miles Davis’s name, now known as “Birth of the Cool” . This was followed, in 1953 by Mulligan’s own Tentette and, seven years later, by the 13-piece Concert Band. In between them came the famous quartet with Chet Baker and the superb sextet.

All these bands, except the very first, featured pianoless rhythm sections. Bands of this size are more nimble and pliable than the conventional big band. The tones of individual instruments blend more readily into new and unusual combinations. Listen to the opening minute of the first number here, with its shifting mixture of trumpet and saxophones, for just a sample.

Mulligan was such an ingenious craftsman when it came to orchestration that there’s scarcely a moment without some subtle detail. They slip by and are gone before you notice. But he was also a great player, and some of his very best is here – warmer and more fulsome than in his earlier years. Manoir De Mes Rèves is a beauty. And the same goes for Brookmeyer, not to mention Zoot. As always with Mulligan, you’re never allowed to forget that this is essentially a jazz ensemble.

The bonus tracks (i.e. the second half of the CD) consist mainly of pieces by other jazz composers he admired – George Russell, Gary McFarland and Johnny Carisi. Russell’s three-part All About Rosie is a tour de force of ensemble playing, Carisi’s Israel is a new arrangement of the same number which first appeared on Birth Of The Cool and McFarland’s Weep, like many of his tunes, is deceptively simple sounding. Mulligan’s own I Know, Don’t Know How is perhaps the best track of the lot, for the sheer melodic charm of both its theme and his solo, followed by a superb duet with Brookmeyer.

Dave Jones - 02 February 2019
For obvious reasons, it’s very difficult to play lines on the baritone sax with the same agility that’s possible on other saxes, but Kofi does a pretty good job...