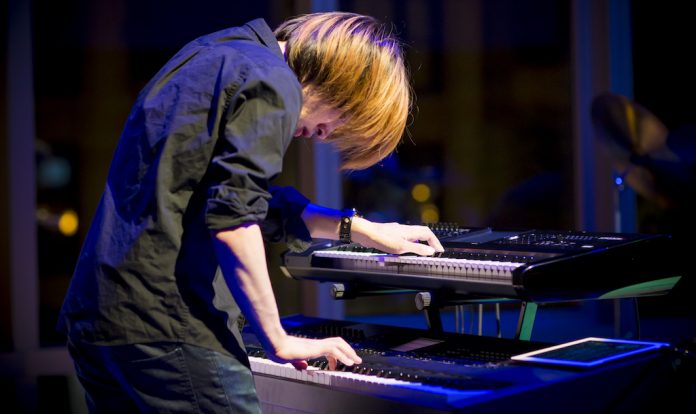 High-quality, uncompromised jazz fusion is something of an endangered species among American and European musicians these days but the Japanese, Boston and New York-based keyboard player Ken Aihara proves it’s still a vibrant and valid idiom. Aihara’s new album Multiverse is a dynamic, virtuosic, harmonically colourful array that should appeal to fans of jazz-rock from Weather Report through Allan Holdsworth and onwards.

Aihara started keyboard at the age of three, later attending Osaka University of Art as an electronic keyboard major. At OUA, he won first prize in various band competitions and received best keyboard award in the OUA graduate concert. Berklee College of Music in Boston then beckoned where Ken graduated B.E. He studied piano under sometime Allan Holdsworth keyboard player Steve Hunt, with Mark Rossi (George Russell) and Dave Limina (B.B. King), to name a few. He also did an electronic production design major in sound design, mix engineering, audio programming and post-production. After graduation Ken moved to New York where he began to play with top musicians, including doing synth and sound design for drummer Tomo Hasebe on an album with Oz Noy.

Multiverse showcases Aihara’s multiple talents, and features Snarky Puppy’s Bob Lanzetti, bassist Evan Marien (who played with Allan Holdsworth) and drummer Marko Djordjevic (who played with Matt Garrison). It’s inspired by role-playing games, and the dense variety of time sigs and forms seems to speak of such metamorphosis, with Ice Mountain sporting a bubbling 11/8 and Spatio-Temporal Wanderer in 5/8.

Bassist Evan Marien said after the session “Ken Aihara is one of the finest synth soloists I’ve played with, and his compositions have incredible depth”, while guitairst Bob Lanzetti said “What composer and pianist/keyboardist Ken Aihara has accomplished on his debut record Multiverse is a perfect marriage of chops and rhythmic and harmonic complexity with tuneful, singable, often pretty songs. In addition, his use of keyboards and synths is thoughtful and always done to serve the music first”.

New York’s a competitive place but if there’s any justice – or discerning musical taste – it seems likely we will hear more of Ken Aihara’s unreconstructed, down-to-earth and engaging jazz fusion.

For more information on Ken Aihara visit his website – ken-aihara.com

This article was produced with the assistance of the artist

Lock down that groove

A new Metheny record – minus Metheny

The ‘Rat Pack’ at Cadogan Hall

John Watson - 02 January 2021
I thoroughly enjoyed the previous release from trumpeter and composer Hamilton’s Jazz Orchestra, The Lost Tapes (New Jazz Records) - a compilation of live recordings made over a period...

Jazz Journal - 03 August 2020
Art Pepper is back in the saddle again. After a protracted absence from the New York scene, the altoist brought a quartet into Fat Tuesday's...