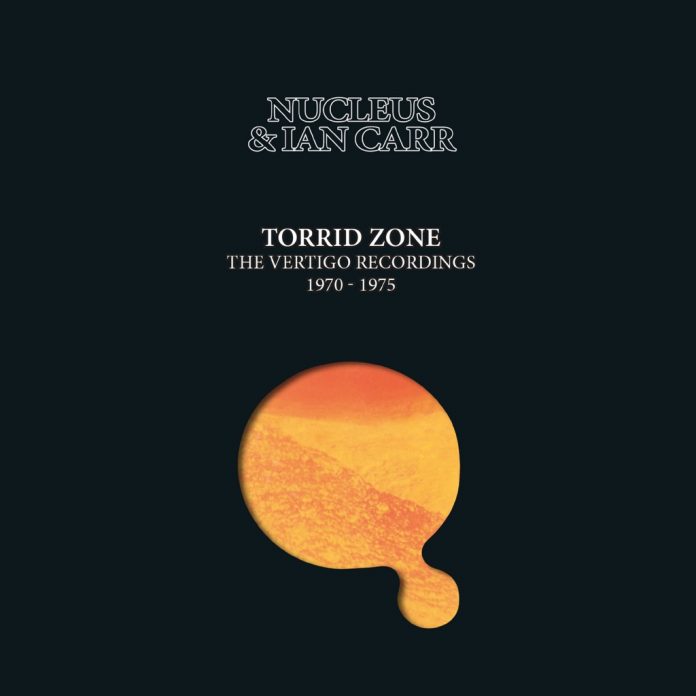 The dates are kind of important here. Elastic Rock was recorded in January 1970. Bitches Brew didn’t come out until March. The question of “influence”, muddied by Ian Carr’s role as Miles’s first serious biographer, shouldn’t really have arisen. What we were hearing was an example of simultaneous evolution, two different strands of development that showed how jazz music was attempting to capture not just rock energy, but also rock audiences. Nucleus went pretty far down that road. How far is perhaps best summed up in a promotional photo taken around the time of Snakehips Etcetera showing Carr (in tartan trews) and the current line-up disporting self-consciously with a very tall glamour model and looking like he was being kissed by a third-favourite aunt. By that stage, Carr who was credited as named leader (with a very different lineup) on 1972’s Belladonna and 1973’s Labyrinth, which was credited as “Ian Carr with Nucleus, plus…”, was in straitened circumstances, struggling to collect royalties funding a road band. The separation of names had first happened on Solar Plexus (the only other album composed entirely by Carr) in ’71. The question of whether it was a collaborative name band or Carr’s surfaced here and there. The balance of composition is interesting, with 37 items composed or co-composed by Carr, 26 entirely by other hands, which makes it about even. He was, though, unquestionably the core member and driving force in a field that at the time was pretty much down to Nucleus and Lifetime.

How does it all stand up now? Elastic Rock remains for me one of the signature albums of its time, perhaps all the more impactful for being first in its field; Alley Cat crawls away at the end of the Vertigo period with a muted snarl and a matted image. The idea of the group a tightly interconnected ensemble of like-minded guys always seemed to work. Karl Jenkins, who composed the title track of the first album and also passed through Soft Machine, has become a major composer, albeit in a semi-populist vein. Most of the other alumni have gone on to do interesting and original things. Carr himself continued to explore and became a major proselytizer for jazz-rock and fusion as the natural terminus of the music’s development. He sometimes really did make it sound like a terminus and could be shrewish at any suggestion that jazz had evolved any further, in any direction, since 1970.

The tight energy that made Nucleus such a rewarding live band is also there, not surprisingly, in the studio recordings, which benefited hugely from Pete King’s and then Jon Hiseman’s sympathetic production. They have to be considered charter members, too. What the albums reveal, when listened to end to end, is how many ideas were recycled and recirculated through different instrumental permutations. Sometimes the titles are the only points of resemblance (like Snakehips’ Dream on Solar Plexus or Jenkins’ 1916 fixation), but one also detected Carr’s habit of doing what Miles was also doing and running down lots of similar ideas in different permutations and contexts, so that this seems like a more coherent body of work than anyone might have expected from the band’s history. The only record that seems to stand a little aside musically from the rest is Roots, which is 50/50 Carr and Brian Smith lines, with a single track by Dave MacRae at the end, so not in any compositional sense different from the main line of production.

Nucleus were important, not just for the musical synthesis, and for bringing together mutually suspicious audiences, but for the impetus the group gave to a whole field of fine British fusion that followed, and remains, one of these islands’ genuine contributions to modern music. As such, this is a valuable memorial to the band, and to its sometimes lonely leader.

Elliot Marlow-Stevens - 21 June 2022
The now legendary Friday Night In San Francisco was released in 1981 and captured the above guitar trio at their show at the Warfield Theatre the previous December. As...