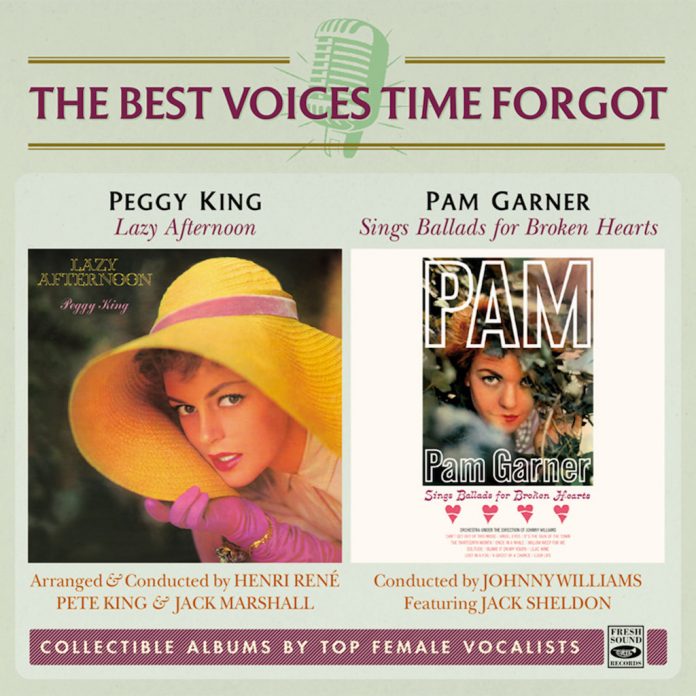 The titles above will give you an idea of what to expect from these two in Fresh Sound’s “Best Singers That Time Forgot” series. Both King and Garner are in laidback mode, singing for late night or romantic date type listening and the tempos never move above medium.

Actually, Peggy King hardly qualifies as forgotten as she recently released a new CD in her late 80s – Songs Á La King, also on Fresh Sound – and proved that she still had it. Sounding not unlike early Peggy Lee, King begins with the slow ballad Rain and then smoulders warmly and lyrically through You’ll Never Know before caressing the words to Till There Was You as the orchestral strings surround her sympathetically. The lesser known Sure Thing is even more relaxed and at this point many listeners will regret there are no tempo changes to liven things up. Ideal for that late-night record session though. The string orchestra is punctuated with the occasional jazz trumpet solos. Verdict: superior jazz mood music.

Much the same comments apply to Pam’s record. She glides smoothly through her 12 slow ballads and jazz standards. Her voice is strong in all registers and she sings confidently on the beat with good support from Jack Sheldon sounding relaxed on muted trumpet. The jazz quartet is augmented by a full set of strings and again the tempi stays in the slow to medium range. She manages to convey the inherent mood in these selections and is particularly impressive on Talk Of The Town. Sheldon’s backing is spot on and the jazz quartet get more of a look in here.

Both of these sets confirm just how many really good jazz singers had a brief moment of fame in the 1950s and then faded, not because they ceased to be good but because popular music changed so radically.

Discography
(1) Rain; You’ll Never Know; Lazy Afternoon; ‘Till There Was You; Sure Thing; I Remember You; Love And The Weather; Imagination; Love Walked In; Hi-Lili, Hi Lo; Nobody Else But Me; Littleboy Heart (2) Can’t Get Out Of This Mood; Angel Eyes; It’s The Talk Of The Town; The Thirteenth Month; Once In A While; Willow Weep For Me; Solitude; Blame It On My Youth; Lilac Wine; Lost In A Fog; Ghost Of A Chance; Lush Life (69.15)
(1) King (v); with orchestras conducted by Henri Rene, Pete King and Jack Marshall. Hollywood, 1959. (2) Pam Garner (v) with quartet including Jack Sheldon (t); Jimmy Rowles (p); Red Mitchell (b) & string section. NYC, 1959.
Fresh Sound FSR V105

Bruce Crowther - 05 February 2020
Following her explosive early 1940s spell with Gene Krupa’s band, the first half of the 1950s was a golden time for Anita O’Day. Working with Norman Granz, she made...