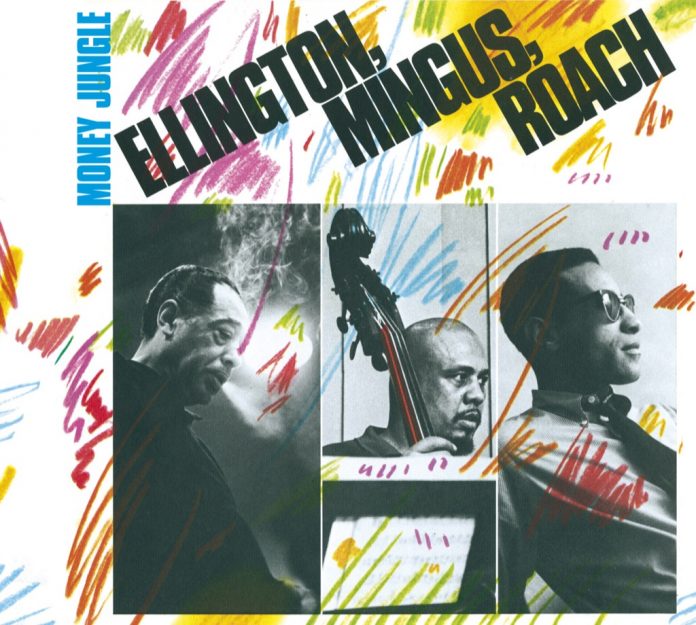 Duke Ellington rarely played in a trio setting so his proposal to United Artists that he should record a piano-based album was surprising. They suggested that Charles Mingus be the bassist and he in turn insisted that Max Roach play the drums.

Ellington informed Mingus and Roach that he didn’t want to record only his own material but on the day all the compositions were written by him apart from Caravan. At the start of the recording Ellington supplied lead sheets for his music giving just the basic melody and chords with visual descriptions such as “Crawling on the streets are serpents – these are agents and people who have exploited artists. Play that along with the music”. The three had turned down the chance of rehearsals which meant that this recording session was their first experience of playing together. And what a session it turned out to be.

Ellington was aged 63, Mingus was 40 and Roach 38. Their session was the capstone of two generations bridging the gap between swing and bop. Some see Ellington’s collaboration with the younger pioneers of “modern” music as allowing himself to be pulled into the new melodic, harmonic and rhythmic concepts. However, it’s clear that Ellington was already well aware of these developments. Just listen to his Monk influenced piano on Wig Wise, Very Special and Switch Blade to demonstrate this.

Others say the recordings are a commentary on the racial issues of the time but whilst all three had previously composed and performed music championing black rights there is no clear evidence of any similar intentions here. There is, however, a markedly pent-up tension within the session as Mingus and Roach keep pushing Ellington into showing them who’s boss. Also Roach had been winding up the volatile Mingus throughout the session and the latter is heard playing louder and louder until at one point, at the end of Money Jungle, he stormed out of the studio and had to be brought back by Ellington. In that track, which was ninth in the original recording order, you can hear Mingus ferociously plucking strings with his finger nails. Juan Tizol’s Caravan is another thunderous delivery with urgent piano, rampant bass lines and probing percussion. In contrast, the delicate Fleurette Africaine, meditative Solitude and Warm Valley are poignant ballads. A Little Max has a distinct Latin jazz tinge. Very Special and Switch Blade are both 12-bar blues as are REM, Backward Country Boy and the title track.

This engrossing album, with its wide range of moods and tempos, comes with alternate takes and a bonus trio session from 1953 comprising three tracks by Ellington, Wendell Marshall and Dave Black.

Barry Witherden - 09 April 2021
This is the debut recording by Hague’s new band. In fact, he has been using the Double Standards brand for his quartet dates, focusing on less familiar jazz warhorses,...