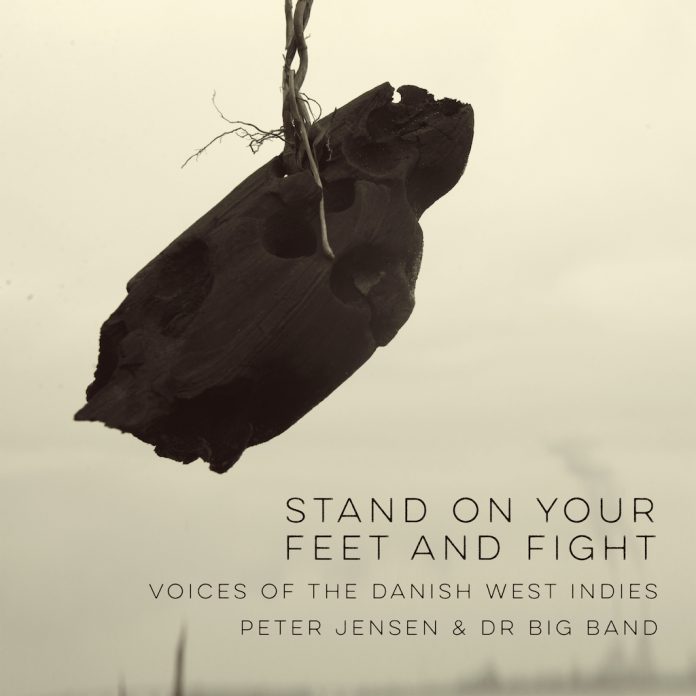 Based in Copenhagen, Peter Jensen is a trombonist, teacher, sometime radio-host, self-taught composer and – currently – artistic director at the Tivoli Gardens in Denmark’s capital. A long-time member of the Danish Radio Big Band, his previous ILK release, the 2018 Crystal Palace, offered a striking left-field take on big band textures and dynamics – the contemporary potential of freshly configured “sonic architecture”. It drew special praise from fellow JJ critic Brian Morton, who deemed the release “an extraordinary work, doubtless standing outside some definitions of what jazz is supposed to be about”.

The good news, as invigorating as it is provocative, continues here. Clearly, Stand On Your Feet And Fight is political in import, its title conjuring potential associations with the full-on energy of works like Max Roach’s Freedom Now Suite or Archie Shepp’s Things Have Got To Change. But the poetics of the politics here are something else. On the occasion of the centennial of the sale of the Danish West Indies colonies to the United States, the Royal Danish Library asked Jensen to write a work for the DRBB, based on field recordings in the library’s collections. Recordings of (female) monologues and dialogues duly feature, the cadence of the voices intrinsically melodic. Also present are brief sections from a 2017 “onwards and upwards” speech from Denmark’s prime minister of the time and some haunting upper-register “sound-melody” vocal meditations from the DRBB’s Jakob Munck, in the latter stages of The Prime Minister’s Speech.

Anyone expecting a cornucopia of calypso should look elsewhere. Apparently, live performances of the piece precipitated both enthusiastic reviews and walk-outs from protesting audiences. Certainly, African-inflected polyrhythm is here, in the extensive percussion figures which wrap themselves across and around the interplay of Vadsholt’s spaciously projected pizzicato bass figures and the sampled female vocal on Fireburn. But the structure and the dynamics of this wide-ranging and scrupulously realised, collage-like project are mostly much closer to the dynamics of contemporary “serious” music and archetypal European free jazz: hear the floating opening “sound atmospherics” of Bad Men and the subsequent, in-part atonal piano musings from the excellent Gunde; the brooding and sliding interplay of the sectional planar figures of Triangular Trade, and the broiling energy of guitarist Gade and drummer Frost on the title track – the intensity of their interaction reminiscent of the Edward Vesala/Terje Rypdal burn-up on Star Flight from Vesala’s 1976 ECM recording Satu.

Throughout, the taut yet “breathing” arrangements evince a most special and cliché-free sensibility. Each of the six pieces offers a different take on matters of voicings and dynamics, with a tempered range of telling solos including a deeply reflective outing from Hans Ulrik, one of Denmark’s finest saxophonists, on the opening Bad Men.

Any music that, among other things, can make one think afresh about the transcendent soulfulness of Coltrane’s Alabama or the dialectics of Kierkegaard has to have something special to it. And this is one special piece of music.

Nic Jones - 15 December 2020
Anyone who wakes up at 2 a.m. in a cold sweat and troubled by memories of Bobby McFerrin's anodyne ditty of the same title as this album need not...

Miles Davis: Before The Cool