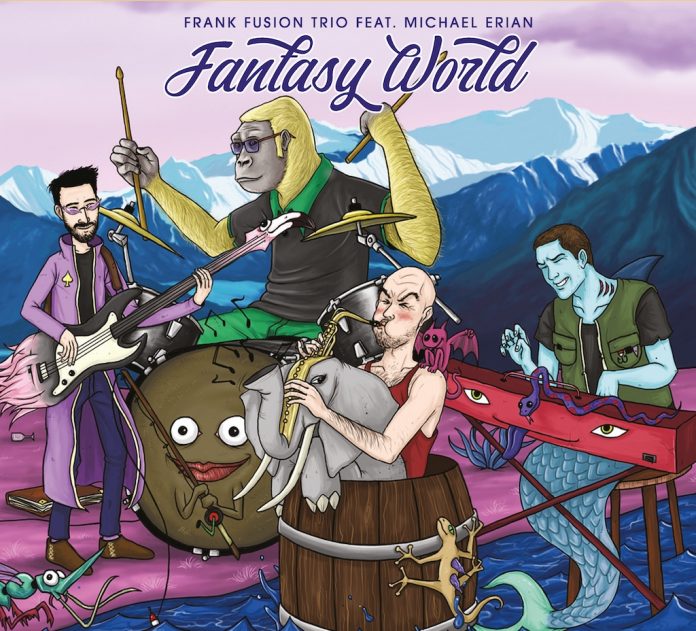 Following on from a long tradition of album covers designed to discombobulate a prospective listener, comes Fantasy World. Frank Zappa was wont to use deliberately bizarre artwork for his LPs, think Weasels Ripped My Flesh. Fantasy World’s artwork is actually similar in style to Zappa’s cartoonish The Grand Wazoo cover.

But you shouldn’t judge a CD by its cover and the Frank Fusion Trio have, at the very least, identified themselves for what they are, a jazz trio that play fusion, but they also play considerably more.

Just when the listener thinks that the whole album’s content will follow suit from the title-track opener, a nine minute electro-modal outing essentially centred around two chords, we have Internal, which is substantially more cerebral. Love Dance is even further removed from the group’s purported fusion claim. This attractive polyrhythmic piece features its composer, Fabian Mang on piano plus Michael Erian on soprano sax, and a string quartet. The autobahn-paced Brandnew Feeling is augmented by coruscating guitar from guest Armin Polsinger, sandwiched by power keyboard and sax chords.

The potential banality of Digital Doo, initially characterised by an insistent 4/4 pop beat and deliberately zany electro-funk sax is mitigated by an arrangement that forces the listener to keep on listening, whilst the song eventually blooms into an orchid. Hyper Phlegmathism, with its jokey reggae rhythm and circus sound effects is interwoven with portentous heavy metal, adorned again by Polsinger’s shredding. It culminates in a triumphant crescendo, ebbing into a fadeout ending.

Irrespective of the cover art and this Austrian-based trio’s joke name, this is a teasingly good debut album with many genuinely gripping highpoints. So it’s not merely the record’s cover that shares some similarity with Frank Zappa’s oeuvre. Does humour belong in jazz? Well, yes, probably. Meanwhile, if in doubt as to these guys’ talents, check out their sublime, acoustic performance of Stella By Starlight on YouTube – although that’s decidedly not what you’re getting here.

Click here to find out more about the Frank Fusion Trio

Gordon Jack - 01 March 2021
Cedric Caillaud and his little group take an intimate look at some of the less familiar classics from Antonio Carlos Jobim’s extensive songbook. Known as “The Father Of The Bossa...