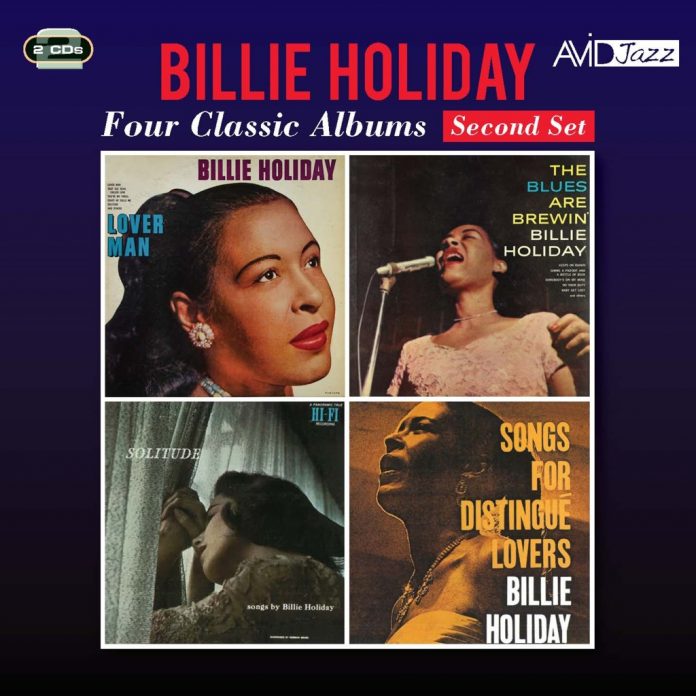 This Avid compilation offers samples from two distinct stages in Billie’s career. The first highlights some of her often underrated 1940s Decca recordings, accompanied by large orchestras (often with strings), and smaller groups. The second tranche comes from her first 1950s studio recordings for Norman Granz, with such Verve stalwarts as Flip Phillips, Oscar Peterson, Barney Kessel, Ben Webster, Harry Edison and Jimmy Rowles. Both periods have their particular and peculiar characteristics, although Billie – whatever the calibre of her accompanists and arrangers – still delivers some of her finest performances.

Highlights from the Decca recordings include the dates which produced memorable versions of such Holiday favourites as Lover Man, My Man, Solitude, Porgy and Crazy He Calls Me. Distinctly less impressive are the vocal backings on Girls Were Meant To Take Care Of Boys, This Is Heaven To Me, and the syrupy strings on Please Tell Me Now. Billie’s duets with Louis Armstrong, My Sweet Hunk O’ Trash and You Can’t Lose A Broken Heart, made at the close of her Decca period, are noteworthy in more than one respect.

On the priceless Trash they kibitz around with teasing exchanges until Louis comments, sotto voce, “Fuck ‘em baby”. There were immediate protests. Downbeat asked icily “since when does Louis have to use obscenity to sell records?” and producer Milt Gabler was forced to splice in a reissued master with “Come on, baby” replacing the offending phrase.

Less controversially, and backed by Sy Oliver’s orchestra, Billie delivers a memorable and updated version of Bessie Smith’s classic 1933 recording Gimme A Pigfoot And A Bottle Of Beer, substituting “Oo-Bop-a-Dop” for “Shim Sham Shimmy”. As Will Friedwald comments: “Holiday’s forties sessions mark the most entertaining and polished in her whole career”.

Solitude, Billie’s first studio session for Granz, has her sometimes straining to reach (or avoid) high notes, and delivering semi-monologue recitations of Foolish Things and Solitude. But she puts her unique stamp on every title, and manages to contend with the vulgar trumpet histrionics of Charlie Shavers on some tracks.

A gently swinging version of Blue Moon has Oscar Peterson (although never Billie’s favourite accompanist) and the stellar rhythm section keeping her steadily afloat. You Go To My Head ranks with Sinatra’s rendition on his Nice ‘n’ Easy Capitol LP, while her 1952 version of Solitude has a more sympathetic (and muted) Shavers and the ever-dependable Kessel enhancing an affecting vocal. On a happy and fast-paced I Only Have Eyes For You Billie unfortunately coins the phrase “bulging eyes for you” – unintentionally evoking a line from her bleak anti-lynching recording of songwriter/composer Lewis Allen’s (Abel Meeropol’s) Strange Fruit (1939).

Songs For Distingué Lovers, despite its silly title (chosen by Granz because it had a nice ring to it) is arguably Billie’s finest Verve album. Webster and Edison (plus Jimmy Rowles-led rhythm sections that could even swing Jacob Rees-Mogg), has Billie in fine voice throughout. Her world-weary interpretation of One For My Baby deserves comparison with any of Sinatra’s studio or concert performances, while Stars Fell On Alabama and Just One Of Those Things are equally satisfying.

Neither Solitude nor Distingué Lovers appears in complete (and currently available) editions, but there is still a lot to absorb and enjoy. Curiously, sleeve notes by Burt Korall to Lover Man and The Blues Are Brewin’ (and by Granz to Solitude and Songs) add little – if anything – to an appreciation of Billie’s actual performances. So, just listen up.

Peter Gamble - 04 September 2019
The first six tracks of this release constitute Herbie Hancock’s debut album as a leader, Takin' Off, originally issued on Blue Note, with the remaining material being Hub-Tones for...