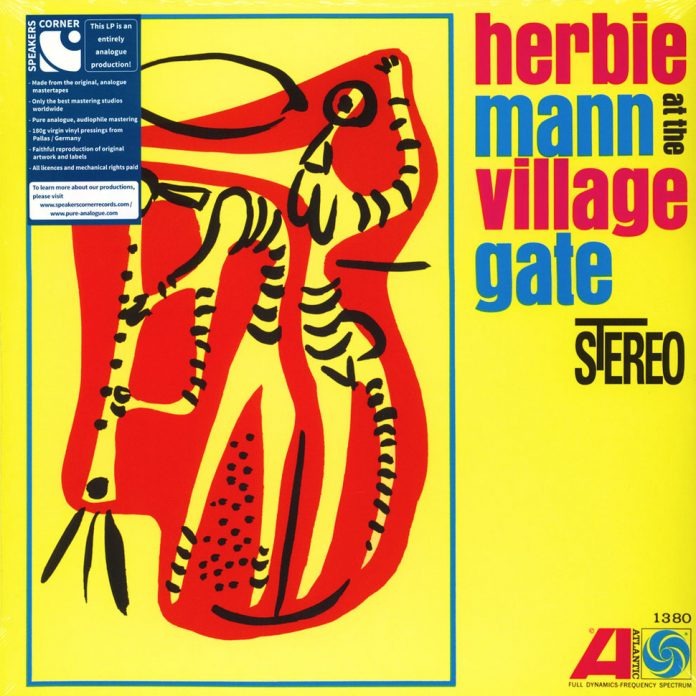 This live session for Atlantic, recorded at NYC club The Village Gate, is one of the most relaxed live jazz club sessions to be found. Herbie Mann’s floating, soft-focus flute is heard against a backing of piano, bass, drums and percussion and, on the opening “Comin’ Home Baby”, an extra bass player, Ben Tucker.

“Comin’ Home” is a long soul-type blues of the kind made very popular in the 1960s by the likes of Cannonball Adderley and Bobby Timmons. Mann is very laid back, his lines inventive within the confines of the form and he is well supported by quiet percussion, the two bassists, drums and vibes player Hagood Hardy – whatever happened to him, I wonder? Towards the end Tucker plays a bluesy bass solo, full of double stops and the piece then winds down.

“Summertime” continues the set with another lyrical solo by Mann and once again everybody appears to be enjoying themselves and playing well without putting much effort into it.

The longest track is “It Ain’t Necessarily”, which takes up all of the second side of this vinyl release.  Almost 20 minutes of low-key flute and rhythm with a brisk solo from vibes man Hardy and a passionate bass solo from Abdul Malik. There is also a fascinating workout on African drum from percussionist Chief Bey before the track slowly slides to a halt with polite applause from the audience. Although everybody plays well there is seldom any change from casual medium tempo blowing and it could be that on this night, the musicians were a bit self-conscious about being recorded and decided to play it safe.

The recording and new mastering is first class and, as with all Speaker’s Corner releases, comes with the original art work cover. The audience seem to be enjoying it all very much so maybe it sounded better live.

Simon Adams - 08 December 2021
The Hammond B3 organ has an illustrious history in jazz, blues, soul and pop music, and was notably played by Stevie Wonder in the early 1970s. Pat Bianchi follows...