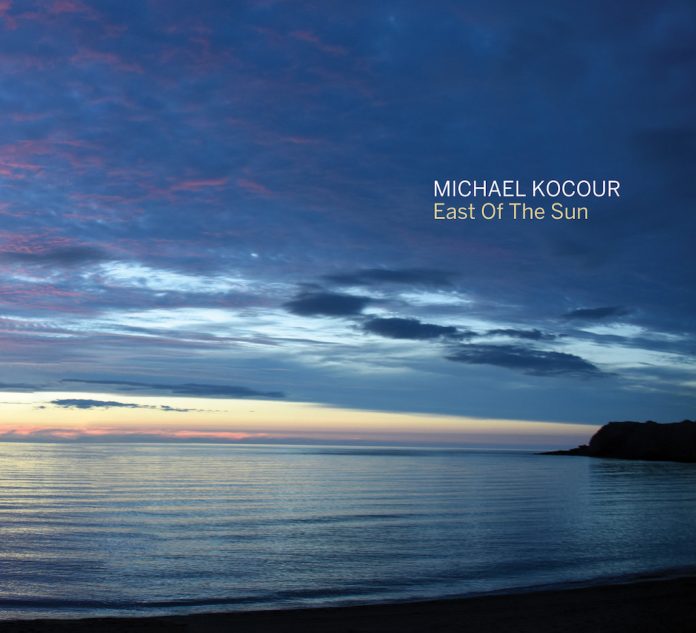 “There is nothing groundbreaking here. I’m trying to be as honest and fresh as I can within the tradition”. That might sound like a recipe for blandness, and true, there’s nothing offensive in this solo piano recital. Kocour is a master of the tuneful and enchanting interpretation of the jazz standard. But the set isn’t quite as innocuous as his description suggests.

It begins, with “East of the Sun” and “I’ve Got a Right”, in regular enough form, with nicely judged swing and stride formations respectively, “East” breaking cover with some ebullient right-hand excursions and orchestrations suggesting two of Kocour’s heroes, Hank Jones and Tommy Flanagan. Even in these nominally routine renditions, Kocour’s powerful sense of melody and motivic development draw the listener in as he essays a wide variety of approaches.

A gently paced “She’s Funny” is a moment of relaxation after the forward tilt of the openers, but then “Sweet Lorraine” seems slightly out of kilter, as if the dedicatee is slightly squiffy. What is that odd gait?

Two or three listens reveal the workings. It’s in 5/4. That “slightly out of kilter” is significant because such is Kocour’s skill at scanning the melody over the odd time-signature that you’d barely notice it – and that’s often not the case with metric reimaginings. It sounds here as if that’s just how he heard it. It might help that in 1984 Kocour was a music and math graduate from the University of Illinois – an easy facility with numbers may be in his blood. Subsequent years in Chicago playing with locals and visitors such as Eddie Harris, James Moody and Benny Golson did no harm either. Now he’s the 55-year-old director of jazz studies at Arizona State University, where he took up post in 2004.

The subtle waywardness of “Sweet Lorraine” seems to get under Kocour’s fingers. “Who Cares” opens with rapid bebop counterpoint, the traditional chords supplanted by Monkian stabs in the left hand and Powell-like scurrying in the right. After this tantalising chromatic diversion the tune appears explicitly only in the last of the four minutes. Kocour is enjoying playing with expectations. He seems to know that the best subversion lies not in bald revolution but in subtle contrast – witness the simple, consonant closing resolution, a moment of sly bathos as striking as anything in the preceding tumult.

The gentle rhythmic trickery continues with “Just One of Those Things” – in 7/4 but driven by Kocour’s melodic momentum to seem perfectly natural – before a return to more standard renditions of “Stardust” and others. One hardly notices the blues has been largely absent but – a measure of Kocour’s mastery at manipulating mood within the boundaries of instrument and genre – there it is at the end in a rollicking, celebratory “I Can’t Stop Loving You”.

Talking boundaries, Kocour is operating here in dangerous territory. The solo piano format is bound to raise the spectre of the cocktail gig. It’s a given that pianists in such situations relieve the tedium of the job where nobody’s listening with private musical jokes. Well, Kocour’s wit will ruffle the feathers in any discerning lady’s boa and certainly shouldn’t remain private.