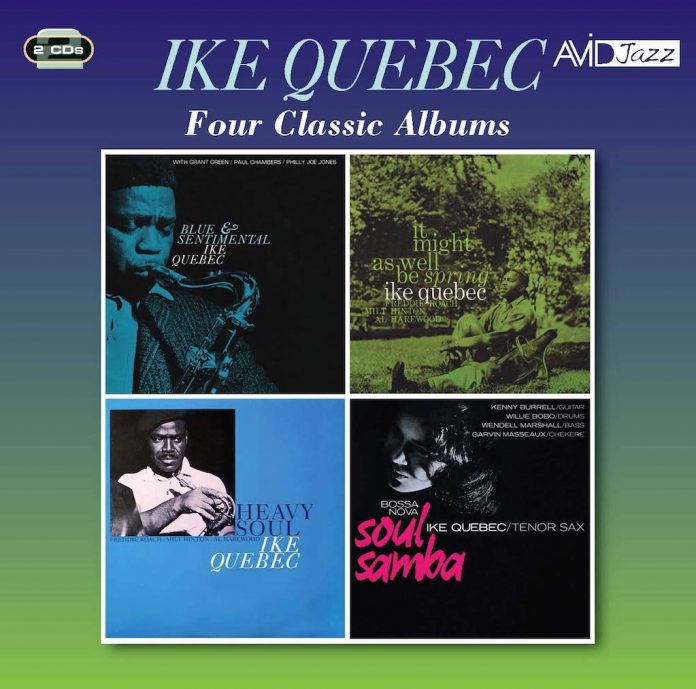 Not generally considered one of the giants of the tenor sax, Ike Quebec (1918-1963), after working as a sideman for Benny Carter, Roy Eldridge and Cab Calloway, made several fine albums for the Blue Note label – the first in 1944 with Ram Ramirez, Tiny Grimes, Milt Hinton and J. C. Heard. As Richard Cook wrote, Quebec, like Ben Webster, “had a tone which turned from thick and romantic to harsh and growling when the tempos went up”. Through his friendship with Alfred Lion, Blue Note’s founder, he became an unofficial A&R man for the label, and anticipating (if not welcoming) the advent of bop, brought such rising stars as Dexter Gordon, Bud Powell and Thelonious Monk to the fledgling company. After a temporary absence from Blue Note (for a time he drove a cab) Quebec returned in the mid-1960s and almost immediately began to record, having in Cook’s happy phrase “matured into a musician of almost apologetic grandeur”.

Three of Quebec’s best Blue Note albums are contained in this anthology. The most impressive is Blue and Sentimental on which he receives near-perfect support from Green, Chambers, Philly Joe and Sonny Clark. The title track (a tribute to the version by Count Basie, Herschel Evans and Lester Young) receives an extended and pensive interpretation from a warm but rough-sounding Quebec, a dazzling solo from Green and unobtrusive support from Chambers and Jones (but surprisingly little from Clark). “Minor Impulse” and “Like” (both Quebec originals) have ravishing solos by the leader; “Count Every Star” is a vehicle for Green. “Don’t Take Your Love From Me” displays Ike’s mastery of the ballad form and “Blues for Charlie” features blues-drenched exchanges between the tenor and guitar. On all counts, this is an impressive and rewarding collaboration between five highly gifted soul mates.

It Might As Well Be Spring, with organist Freddie Roach in good form, offers a selection of standards (including the title track), sensitive interpretations of “Lover Man” and “Willow Weep for Me”, but a vulgar and disappointingly repetitious “Ol’ Man River”. Two Quebec compositions, an atmospheric – “A Light Reprieve” and a Webster-ish “Easy-Don’t Hurt” – make for more rewarding listening.

Heavy Soul gets off to a rhythmic start on another Quebec original “Acquitted”, with happy exchanges between Ike and Roach, gently propelled by Hinton and Harewood. Roach is less in evidence than on Might As Well Be Spring, and this is very much the leader’s date. Highlights include a ravishing “One More Chance” and an arresting “Man I Love” – moving from a languorous start to an uptempo finish, and an arresting and impassioned version of “Brother Can You Spare a Dime”.

Bossa Nova Soul Samba – recorded only months before Quebec’s death from cancer – if not quite up to the standards of the other three albums under review, still has a lot to recommend. Ably supported by Burrell, Masseaux (playing a chekere, a dried gourd), bassist Marshall and drummer Bobo, Quebec (an admirer of Stan Getz) fashions some “un-Getz-like” Latin melodies. The best tracks are arguably “Lloro Tu Despedida”, “Me ‘N’ You” and “Blue Samba” (both Quebec originals). The group’s quietly undulating version of “Liebestraum” (unlike Earl Bostic’s raucous single) should not arouse the ire of classicists.

These “Four Classic Albums” are welcome and overdue tributes to a sadly neglected artist. If only Avid would make the accompanying liner notes – by Ira Gitler, Nat Hentoff, Leonard Feather – legible to ordinary (and ageing) mortals.

Jeremy Isaac - 08 March 2022
Swedish pianist, organist and composer Staffan Bråsjö was educated at the University of Gothenberg’s Academy of Music and Drama, and Stockholm’s Royal College of Music. Although his classical influences...