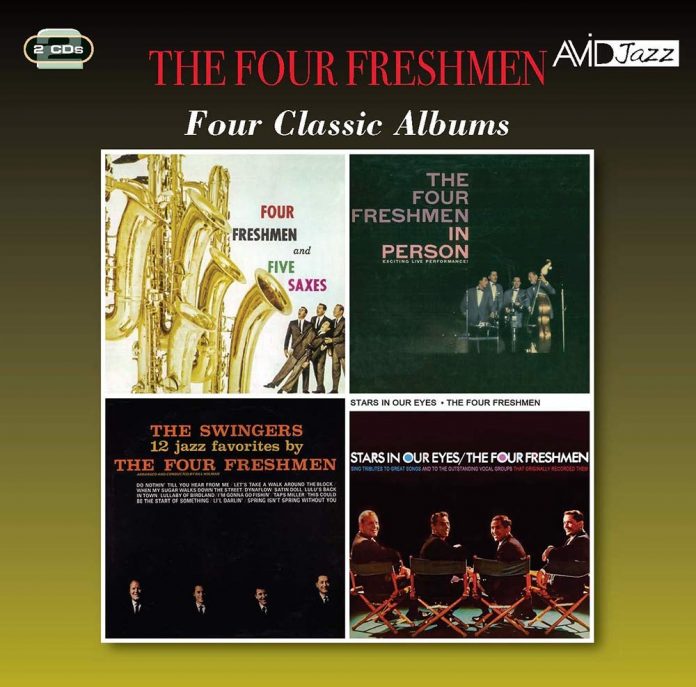 My 18th birthday fell on a weekday. I was already working and when I returned home amongst a smattering of gifts was the kind of portable record player rapidly becoming ubiquitous in teenage bedrooms across the nation. These were essentially boxes with carry-handles, built-in speakers, external knobs to control tone and volume and a record deck manufactured by either Collaro or BSR Monarch that would play up to 10 discs at four speeds and if the discs were 12” vinyl LPs the deck would deliver close to five hours non-stop. In those days any shop that was not a chemist or an undertaker closed at 5pm, 5.30pm, or 6pm at the latest so though I now had the hardware I lacked ammunition.

The next day I was happy to forego lunch and take a bus to the closest record shop where I purchased my very first album – Songs for Swingin’ Lovers for what seemed then an expensive 37/6.  The very next day I missed lunch again and returned home with a second album, The Four Freshmen and Five Trombones. This, alas, is not one of the four “classic” Freshmen albums I’ll be reviewing here although another in the series – Five Saxes – is the lead album.

Founded in 1948, the group is still flourishing today, albeit’s had 25 different members over the years. The personnel on these four albums recorded between 1958 and 1962 remains constant – brothers Don and Ross Barbour, Bob Flanigan and Ken Albers, each also an accomplished musician and playing between them trumpet, trombone, guitar, bass and drums. This was very close to the personnel on the Five Trombones album. [In the interests of clarity: the original group was the Barbour brothers, Flanigan and Hal Kratzsch. In 1953, unhappy with touring, Kratzsch asked to be replaced and Ken Errair was brought in until 1956 when, post Five Trombones, he himself was replaced with Albers; the sound is identical.]

The Frosh established themselves at a time when groups were everywhere – the Four Lads, The Four Aces, The Kirby Stone Four to name three but the Freshmen had a unique “orchestral” sound that enabled them to sound like a bass trombone choir one minute then soar up to a trumpet crescendo. Although they performed dozens of standards their hits tended to be signature songs tailored to their style – “Graduation Day”, “How Can I Tell Her”, “In This Whole Wide World”, and, of course, their first hit “It’s a Blue World”.

The four albums here are representative of the group and as diverse as is possible and represent an excellent buy for aficionados.

Discography
CD1: [Four Freshmen and Five Saxes] (1) Liza; You’ve Got Me Cryin’ Again; This Can’t Be Love; The Very Thought of You; East of the Sun; I May Be Wrong; There’s No One But You; Sometimes I’m Happy; For All We Know; Lullaby in Rhythm; This Love of Mine; I Get Along Without You Very Well [The Four Freshmen in Person] (2) Somebody Loves Me; In This Whole Wide World; Holiday; Sweet Lorraine; You’ve Got Me Cryin’ Again; My Heart Stood Still; Day by Day; Indian Summer; Them There Eyes; Circus; It’s a Blue World; Mr. B’s Blues; Old Folks; Malaya (71.20)
CD2: [The Four Freshmen: The Swingers] (3) Lulu’s Back in Town; L’il Darlin’; Let’s Take a Walk Around the Block; Dynaflow; Do Nothin’ Til You Hear From Me; Spring Isn’t Spring Without You; Taps Miller; When My Sugar Walks Down the Street; Satin Doll; This Could Be the Start Of Something; Lullaby of Birdland; I’m Gonna Go Fishin’ [The Four Freshmen: Stars in Our Eyes] (4) Shangri-La; Sentimental Me; Standing on the Corner; The Lamplighter’s Serenade; Teach Me Tonight; Tom Dooley; Opus One; I Thought About You; Green Fields; Love Is a Many-Splendored Thing; In Apple Blossom Time; Imagination (70.38)
Bob Flanigan (v, b, tb); Ross Barbour (v, d); Don Barbour (v, g); Ken Albers (v, t); variously with: Bud Shank (f); Bob Cooper (as); Dave Pell (ts); Ted Nash (ts); Georgie Auld (ts); Skeets Herfurt (ts); Chuck Gentry (bar); Gus Bivona (cl); Willie Schwartz (cl). (1) Los Angeles, 1959. (2) Compton Junior College, Los Angeles, 1958. (2) Los Angeles, 1962. (3) Los Angeles, 1963.
Avid Jazz AMSC 1325

Bruce Crowther - 17 August 2020
A singer whose repertoire and style was mostly suited to the pop music of the day, Lynn Taylor (1937-1979) worked for a while in New York City where she...