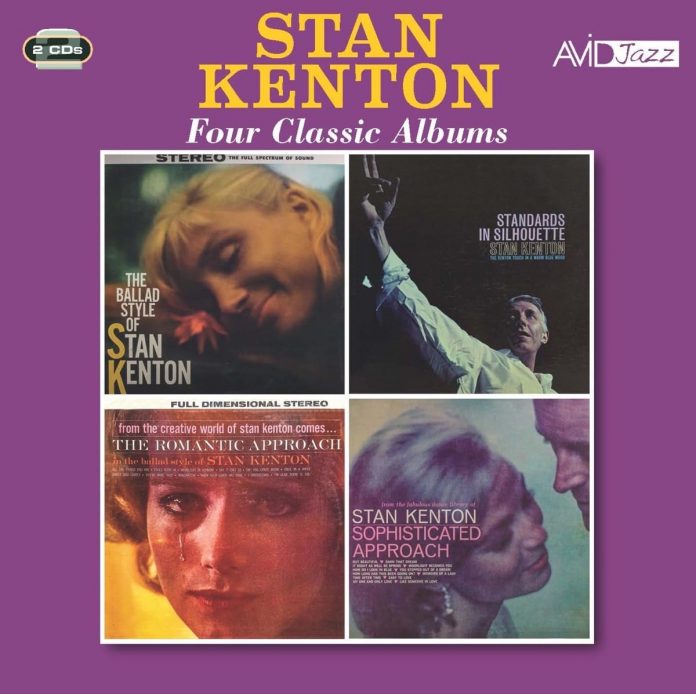 In a long, controversial and undeniably fruitful career, Kenton and his various (often elephantine) orchestras produced music that either delighted or enraged jazz “buffs”. Some of his many albums – West Side Story, Kenton In Hi Fi, City Of Glass, New Concepts Of Artistry In Rhythm (all on Capitol) – have withstood the test of time. Others have disappeared almost without trace.

There are a few marks of barrel scraping on this latest classic albums release from Avid. Only one of these late 1950s / early 1960s albums really deserves the honour. The remainder might be more fittingly titled “Kenton Lite”. Ballad Style has gentle and precise playing by the 20-piece orchestra, with Kenton as the only soloist. All the tunes are at the same soporific tempo. It was a pity that Kenton didn’t allot solo space to some of the band’s luminaries – Bill Perkins, Richie Kamuca, Lennie Niehaus and Don Fagerquist. The anonymous sleeve-note writer comments that this ”is a collection of lush ballads in melodic good taste and scored by the foremost exponent of the Kenton sound, Mr Stan Kenton himself”. Try Then I’ll Be Tired Of You, Early Autumn and/or Moon Song, but try not to nod off. Good sound, though.

Standards In Silhouette is an altogether different matter. The arrangements are by Bill Mathieu, and Kenton himself makes only brief appearances on piano. Unlike Ballad Style, this album (recorded in then state-of-the-art stereophonic sound) allows more room for soloists, notably trombonist Don Sebesky, altoist Charlie Mariano and baritone saxophonist Jack Nimitz. The brass and reed sections provide attractive frameworks for truly “classic” songs – I Get Along Without You Very Well, Django and Ill Wind. A “Sweets” Edison sounding muted trumpet may well be that of Bill Chase. After initial reservations, Mathieu expressed himself completely satisfied by the decision to record the album in a cavernous ballroom where “the players could hear themselves well”, adding: “The end result is [that] the band sounds strong and cohesive.”

The conjoined CDs Stan Kenton & His Orchestra –The Romantic Approach and Stan Kenton – Sophisticated Approach are much of a muchness. The first album has the addition of four mellophoniums (don’t ask) and one tuba. Kenton weaves in and out of the disciplined sections, and the selection of song titles is good – All The Things You Are, I’m Glad There Is You, and Once In A While.

Sophisticated Approach (recorded in 1961) almost lives up to its title with imaginative and carefully crafted arrangements by Lennie Niehaus. But again, the overall mood is bland and not light years from Muzak. I began to wilt listening to many of these tracks. This is a disappointing, dull and flimsy collation from Avid. Only surgically programmed Kenton completists will want to give it shelf space.