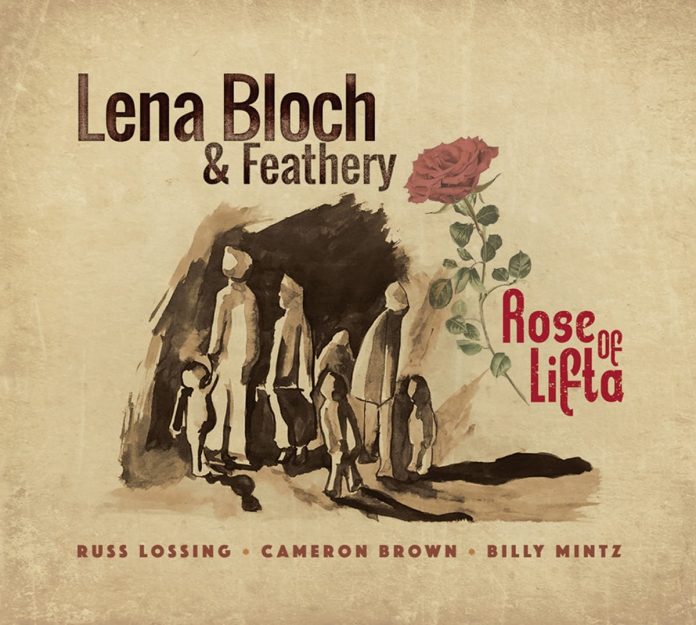 While some musicians may flirt with cross-cultural fusions in a rather superficial way, saxophonist Lena Bloch’s growth as a world citizen has been rather more organic. The native Muscovite departed Soviet-era Russia for Israel in 1989, before spending over a decade honing her craft in Germany and the Netherlands. Arriving in New York in 2008 to complete her masters, Bloch has now laid down roots in Brooklyn.

Rose Of Lifta is the third album by her stellar Feathery quartet, and the second with the absurdly gifted Russ Lossing. The conceit behind the group’s name lies in their ability to rapidly shift direction, darting from point to point like a feather borne on the wind. Lossing shares compositional duties, and rounding Bloch’s tight-but-loose ensemble are veteran bassist Cameron Brown, still an electrifying presence, and undersung drum hero Billy Mintz.

Inspired by Palestinian poet Mahmoud Darwish’s musings on the condition of exile and notions of home and belonging, Rose Of Lifta has a strong autobiographical thread. While much has been written about Bloch’s indebtedness to the Tristano, Konitz and Marsh schools, for me it is the intersection of Eastern and Western traditions that always makes her music so gripping.

Promise Of Return revolves around Brown’s dancing bass vamp, a tantalising glimpse of the East. Lossing’s reflective solo precedes an elaborate bridge, and Bloch then crafts a thoughtful solo spun with dark sinewy lines. The title track, named after an Arab village in Israel, encapsulates the struggle for survival in the face of great adversity (“Against all odds the rose will continue to climb” – Iman Annab).

New Home and Old Home were both penned by Lossing, the first capturing the excitement and optimism of the new, the latter tinged with an inevitable sense of loss. Notwithstanding the brilliance of Lossing’s impressionistic depictions of falling snow on Wintry Mix, Bloch’s dedication to Darwish is for me the clear standout. It’s a stormy free-flowing dirge, in which emotions are drained in an extraordinary collective display of suppleness and power.

Containing music which is simultaneously of and between cultures, Rose Of Lifta tackles some weighty themes and is not always an easy listen. Ultimately it speaks of the artist’s repeated resilience in the face of upheaval, its message nothing less than life affirming.

Peter Gamble - 21 July 2021
This is the seasoned Herring’s fifth album as leader for Smoke Sessions and while it doesn't cover any new ground, the potential listener is assured of a thoroughly enjoyable...