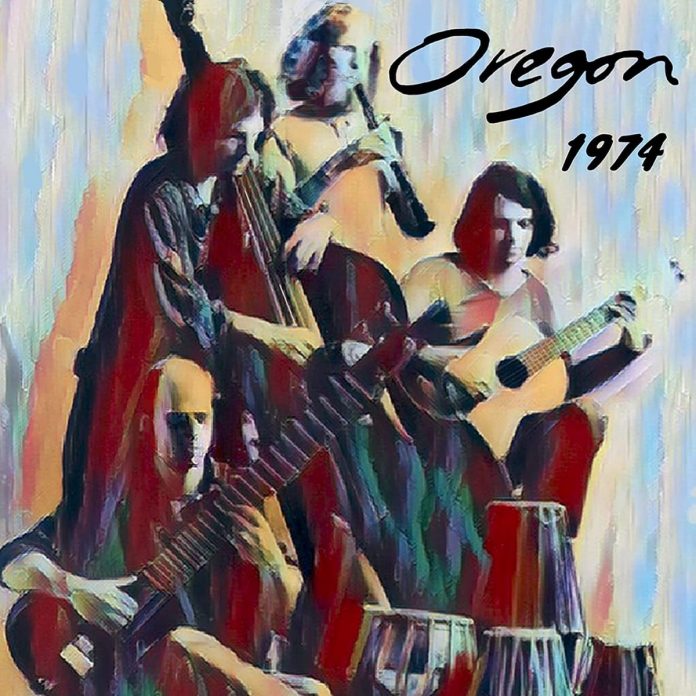 Formed in 1970 as an offshoot of the Paul Winter Consort, Oregon produced a blend of jazz, folk and European and Indian classical musics that would become hugely influential on the then emerging ECM sound. Towner and McCandless remain one of modern jazz’s great pairings and adding Walcott’s sitar and tabla and Moore’s propulsive upright bass the group found success while bucking the prevailing trend towards electrification.

The group’s first three contemporaneously released Vanguard albums, Music Of Another Present Era, Distant Hills and Winter Light (1973-4) remain essential documents of the era, so the first-time release of these 1974 recordings from German radio is not without significance. Later post-Walcott editions of the group are less fondly remembered, and some would even dismiss the music as “New Age”, but this set is a reminder that Oregon’s earlier music was as raw, untamed and free as it was light, airy and impressionistic.

Perhaps surprisingly given the depth of talent in the band, Towner takes the writing credits on every track. The material will of course be very familiar to longtime fans, but rather less familiar will be the near pristine nature of Radio Bremen’s sound recording. If some of the finer nuances of those early Vanguards were occasionally lost in the mix, this set preserves the group’s spring-loaded interplay in vivid detail.

Disc one opens with Brujo (“Sorcerer”), a piece which would soon be recorded with guest drummer Elvin Jones. McCandless soars above an ever intensifying backdrop of rubato exchanges before the group slowly but surely find their groove. Walcott’s tabla is to the fore on Ghost Beads, and like many of the tracks it clocks in at around 15 minutes, allowing the musicians time to experiment and develop ideas.

Dark Spirit keeps the fires burning with some of most impassioned soloing of the set, while Ogden Road brings a change of pace, generously featuring Walcott’s underrated piano. The second disc contains some of the group’s best-loved pieces. Distant Hills, Ravens Wood and Canyon Song have been recorded many times but rarely sounded so good, while the closing Silence Of A Candle presages the group’s shift towards shorter and simpler song forms.

All in all 1974 is an important piece of musical archaeology, capturing one of the great groups of the 70s in their prime.

Michael Tucker - 13 December 2019
A welcome pairing of two durable and delightful albums featuring Coltrane as he acquired ever greater authority in the mid-to-late 1950s. But this release is not all about Coltrane,...