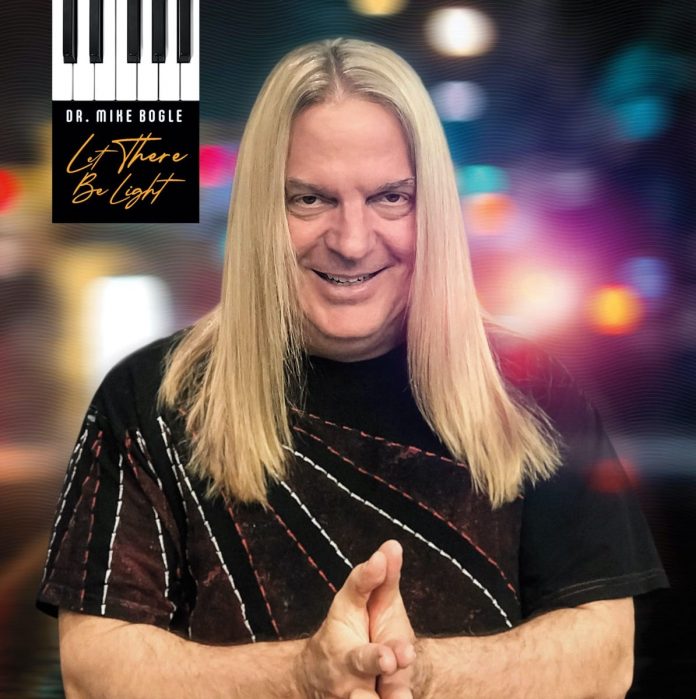 In the world of jazz, being exceptionally proficient hardly suffices. It is crawling with musicians that play dead-perfect Parker without an ounce of Bird’s feeling and focused and intuitive improvisations. To our satisfaction, it is also rich with creative cats that need but three notes to say something meaningful. Then there are musicians like Dr. Mike Bogle, that baffle by putting their chops to the service of Las Vegas hotel-lobby jazz.

As a newcomer to the strange biotope of Bogle, I have no way of knowing if the Texan keyboardist and trombone player enjoys merits in medicine, though I suspect that he is not, similar to the recently deceased organist Dr. Lonnie Smith, a practising doctor. Liner notes reveal that Bogle nonetheless functions on a professional level as professor of music at Dallas College. Bogle was big news way back in 1992, receiving a Grammy nomination for arranging Chick Corea’s Got A Match. Since then, Bogle has worked with such contrasting personalities as James Moody and Jaco Pastorius. Let There Be Light is his sixth album as a leader.

Latin-tinged fusion is Bogle’s natural habitat, as is revealed by both Voyager’s Dreams and Let There Be Light. In spite of these pedestrian, radio-friendly melodies, Bogle, vibraphonist Dana Sudborough and bassist Buddy Mohmed take excellent solos. Mohmed’s prominent bass groove underlines Eat Your Vitamins, which drowned in synth restores the soundtracks of 1980s soap operas from oblivion, regardless of Bogle’s solid trombone intermezzo.

Furthermore, Bogle’s vocals and lyrics, in tandem with the idle groove, make matters considerably worse, revealing frightening lack of irony. Having pondered at length about Bogle’s aim in singing lines such as “Eat your vitamins, eat your vegetables”, I’ve come to the conclusion that he means business and I realise that Bogle might be a doctor after all. At least among the best of Dallas dieticians.

Now that Pee Wee Ellis, like Lonnie Smith, has passed away recently, Bogle’s cover of the funk and jazz saxophonist’s famous The Chicken might be considered as homage. A good thing that The Chicken is the album’s highlight, adding a bit of spice and featuring hip and superb vibraphone playing by Sudborough, though it finally collapses under the weight of its monotone pulse and tasteless albeit well-played guitar-synth sounds. Unfortunate and firm summary: well-executed but tasteless.

John Adcock - 09 June 2020
Swedish drummer and composer Martina Almgren offers a swinging, open and highly contemporary listening experience on this, her second solo album. In contrast to her previous album, This Song Of...