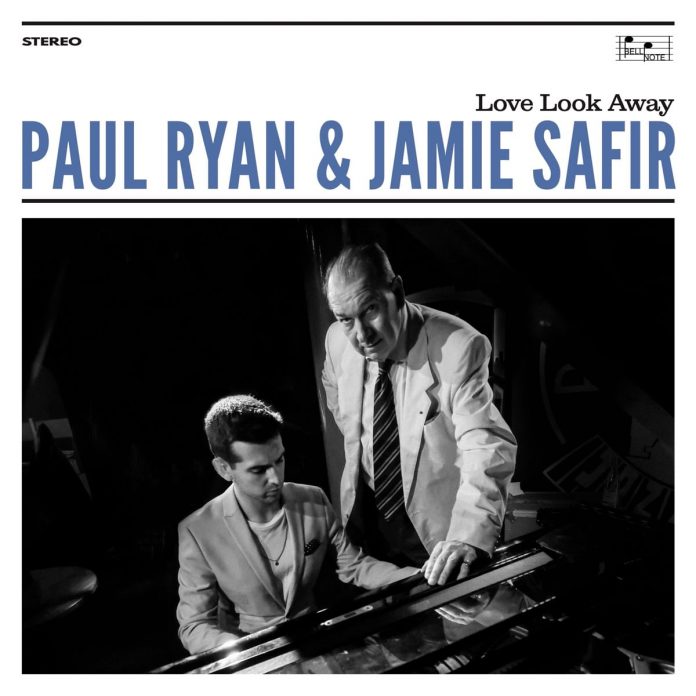 Since seeing this pairing at the Pheasantry, pre-Covid (review August 2019), things have changed, but the arrival of this CD has been a reassuring constant. At the time, I was impressed by their rapport and responsiveness, so it was good to see that Paul Ryan and Jamie Safir have managed, despite the circumstances, to get this recorded and released.

The material is a selection of ballads, standards and show tunes, including some from the Tony Bennett/Bill Evans collaborations (Days Of Wine And Roses, We’ll Be Together Again, You Must Believe In Spring, My Foolish Heart). Each number is economic in time; pared down to lyric / piano-break / ending in structure and a vehicle for Paul Ryan’s relaxed, warm baritone and the reflective and melodic interpretations of pianist Jamie Safir.

It’s an easy album to settle into, with some old favourites: Moonlight In Vermont, with its rhymeless lyrics and haiku-like format; the underrated Rodgers and Hammerstein’s Love Look Away from Flower Drum Song; the Gershwins’ How Long Has This Been Going On, which was dropped from the original Funny Face musical (1927). Apparently not suited to Adele Astaire’s voice, it was replaced by He Loves And She Loves, but reinstated in the 1957 film version. Both are covered here, one segueing into the other, Ryan’s voice eminently suitable.

There’s also the intimacy of My One And Only Love, Ryan’s phrasing and smooth velvet tones (watch out Johnny Hartman!) mirrored in the richness of Safir’s interlude. Similarly, The Folks Who Live On The Hill is ideal for Ryan’s timbre, whilst Safir’s tonal shading frames the delivery and the imagery.

One of Ella Fitzgerald’s favourite numbers was Matt Dennis’s Angel Eyes, and it would seem to be the case with Paul Ryan – a definitive rendition, as he creates a late-night world weariness that resonates and is mirrored by touches of disquieting tension, almost dissonance, from the piano, Satie-like at times. Usually a show finisher, with its line “Excuse me while I disappear”, here is My Foolish Heart as an encore.

A thoughtful and intelligently put together album – no gimmickry and sides, just straightforward and from the heart. Recommended, while you look out for their live performances.

Discography
Moonlight In Vermont; I See Your Face Before Me; Why Did I Choose You; Days Of Wine And Roses; Love Look Away; How Long Has This Been Going On/He Loves And She Loves; Don’t Like Goodbyes; My One And Only Love; We’ll Be Together Again; The Folks Who Live On The Hill; You Must Believe In Spring; Angel Eyes; My Foolish Heart (46.48)
Ryan (v); Safir (p). London, December 2020 & April 2021.
Bell Note BLA002

Fred Grand - 25 September 2019
Despite being a frequent visitor to the studios since the early 90s, guitarist Thomas Dahl has only risen to prominence relatively recently. A key sideman to Mats Eilertsen, Dahl...