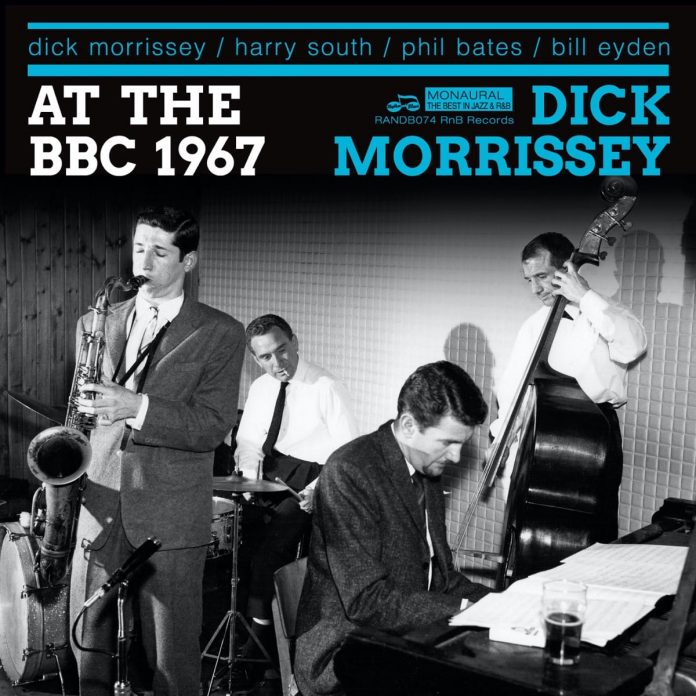 Eclectic jazz saxophonist Dick Morrissey was as much at home playing bebop / hard bop as he was with his later progression into jazz-fusion and funk. At the end of the 60s he switched completely to fusion and co-founded jazz-rock band If with guitarist Terry Smith, making seven albums over six years. Then in 1975 he joined with Jim Mullen to form the highly successful fusion and funk band Morrissey-Mullen recording eight LPs.

Then, after 10 productive years, he telephoned Mullen out of the blue to say he’d had enough. He’d decided to return to his first love, bebop, and to playing jazz for small pub and club audiences which he’d always enjoyed as well as resuming his solo career as a guest and session player.

These BBC radio recordings from 1967 amply illustrate Morrissey’s first period with the standard repertoire in two sets from June and October; they reveal the wide-ranging nature of his jazz delivery. His popular 60s quartet comprised Harry South on piano, Phil Bates on bass and Bill Eyden on drums. South also led his own big band and and composed the television theme for The Sweeney; Bates, a former Jazz Courier, had toured with Sarah Vaughan and Eyden had drummed on Georgie Fame’s Yeh Yeh and Procol Harum’s Whiter Shade Of Pale, recorded just two months before the first set heard here.

Morrissey’s highly expressive tenor sound on this album is an amalgamation of influences from the likes of Ben Webster, Sonny Rollins, Charlie Parker and Tubby Hayes. There are three compositions from American jazz players (Joe Henderson, Paul Chambers and Hank Mobley), one each from the duos of Ira Gershwin & Kurt Weill and Don Raye & Gene De Paul, two by Tubby Hayes, one from jazz composer David Baker, and Sunday Lunch by Harry South.

The second set is longer than the first and affords the opportunity for the band to stretch out on three of the numbers covered earlier – Inner Urge, Le Roi and the ballad You Don’t Know What Love Is. The album’s closing track, Hayes’s fast-tempo Don’t Fall Off The Bridge, peters out after 68 seconds leaving you wanting for more.

This thrilling mix of blues, ballads and energetic swing is a great addition to anyone’s collection of 1960s British jazz. The sound quality is superb and it comes with an insightful 12-page booklet by Simon Spillett.