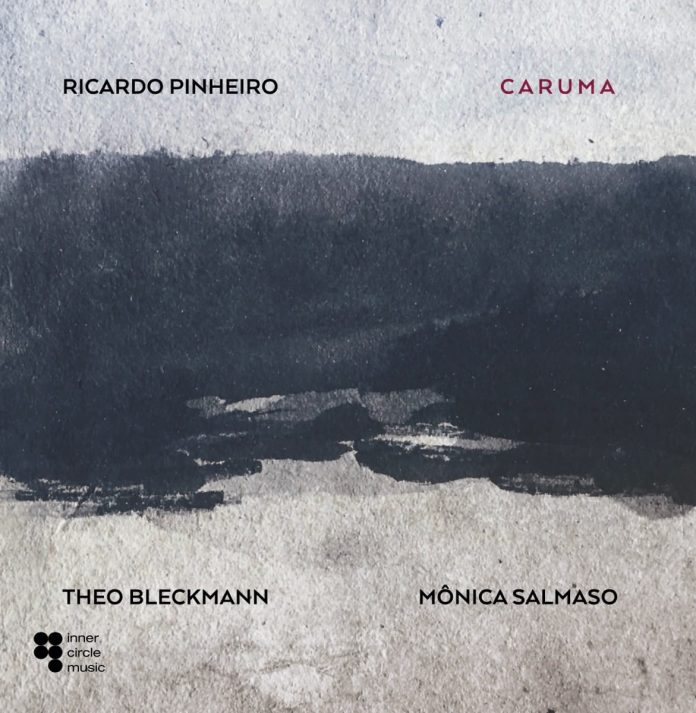 A cursory look at Ricardo Pinheiro’s social network posts reveals myriad pictures of beautiful Portuguese landscapes. Veritable mother-nature’s son, the Lisbon-born guitarist expresses his love for the Sintra woods on Caruma, on which he cooperates with singers Theo Bleckmann and Monica Salmasso.

Caruma translates as “pine needle” and once the puzzlement of hearing the stark coupling of guitar and voices has worn off, reveals itself as an extraordinary head trip. It is a surprising career turn for Pinheiro, even given the fact that he has built a reputation as a multi-dimensional artist. He has worked with Dave Liebman, plays fusion jazz and forms a longstanding trio with bassist Massimo Cavalli and drummer Eric Ineke. Our recent review of Turn Out The Stars: The Music Of Bill Evans reflects on Pinheiro’s uncommon gift of recreating standards in his own image.

Excepting the acoustic folk tune Caruma, which features Pinheiro’s enchanting mix of jazz phrasing and fado ornaments, the repertoire is performed on electric guitar. Pinheiro makes full use of his skills of tone and echo control, flavouring his naturalistic miniatures with overdubbed plaintive lines and soundscapes. As if his one-man band performance isn’t supple and subtle enough, Bleckmann’s vocalese neatly follows in Pinheiro’s footsteps, while the velvet voice of Salmasso adds gentle poetry to the composer’s layered harmonies.

Arguably the finest example of the remarkable unity of Pinheiro’s guitar and Bleckmann’s and Salmasso’s flexible voices is the mysterious Sesta. Pinheiro’s titillating phrases blend with the voices as if they’re little piggies that feast upon the nipples of Porky. This music challenges Lorelei to come up with the goods. It strives for ultimate stillness. It is kind-hearted but there’s a subdued sweltering of emotions.

The spicy Mar Ricardo veers towards prog rock and suggests the influence of Robert Fripp. This and the haunting Resina, that to anyone willing could be used as the soundtrack to a descent into damp, hobgoblin caves, counterbalances Caruma’s poignant program of Zen jazz.

Peter Gamble - 16 March 2020
This is the second album for Enrico Fazio’s Critical Mass for Leo Records, the first being Shibui, released in 2013 and in turn carries on the label’s reputation for...