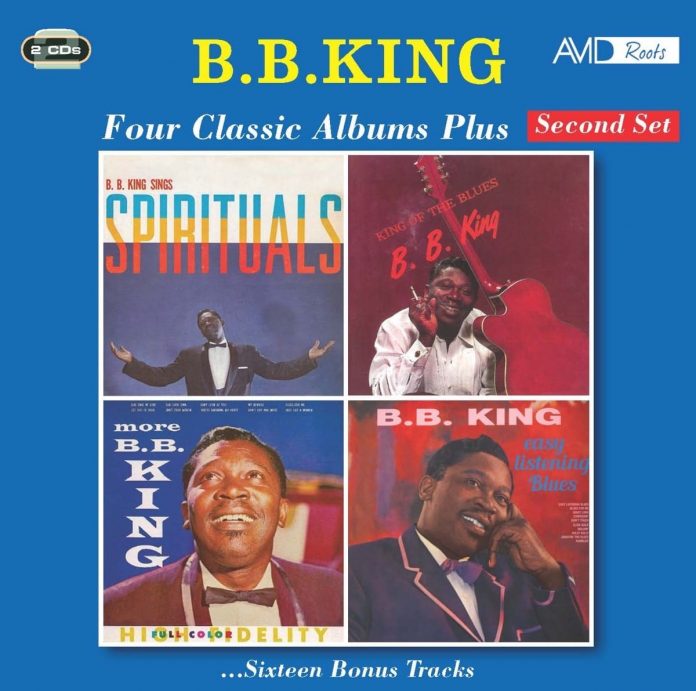 The four albums on this compilation – the second such set issued by Avid – are among the first King recorded in his long career, an album career which began with a couple of compilation albums filled with singles in 1956 and 1958 and then revved up with original material after 1959. Recorded for Crown Records between April 1959 and 1962, these four albums showcase the early development of a man to some extent still finding his own musical space.

The B.B. King Sings Spirituals set is a mismatch, King’s youthful secular, blues voice colliding uncomfortably with the glorious spiritual singing of the Southern California Community Choir and The Charioteers’ backing vocals. King’s guitar is rarely featured, but full marks to the uncredited Hammond organist and praise the Lord for the songs.

No such qualms about King Of The Blues, King’s inherent feel for the blues and his plaintive, unhurried guitar lines courtesy of Lucille all over every track. All of the songs are by King, but all credits shared with one or other of the Bihari brothers – here appearing as Taub, Josea or Ling – who owned Crown Records and increased their revenues by procuring additional songwriting royalties rightfully owed to King.

Tucked away at the end of the first CD are two bonus tracks worthy of attention. On Everyday I Have The Blues, King is paired with the Count Basie Band, on Yes Indeed! with the Tommy Dorsey Orchestra. Basie’s contribution is initially a brassy blast, his light-fingered piano just about audible, but the band eventually quieten down to cushion King’s plantive vocals perfectly. At five minutes plus, it is by far the longest song on the set. Yes Indeed! is better behaved, Dorsey’s warm ensemble voicings stealing the show in a big band finale.

More B.B. King opens with Bad Case Of Love, a Fats Domino-style song that influences the sound of the rest of this largely saccharine, at times, string-laden, set, with only You’re Breaking My Heart standing out for its slow, impassioned guitar solo. Rock and roll, twist dance-crazes and boogie-woogie bandwagons are regularly jumped on here. More King in this case did not mean a better King.

The final set, Easy Listening Blues, is appropriately named, featuring 10 slow, instrumental blues that take their time. Interestingly, only one song is co-credited to Josea, B.B. taking the full credit that is due to him. With no vocals, full attention can be paid to the guitar, King perfecting his less-is-more style as he rolls out line after line of heartfelt perfection. Ever the tuneful guitarist, he makes each solo sing. Of the nine bonus tracks, Maxwell Davis’s saxophone solo on Tell Me Baby is a stunner, while King is in fine voice and emotional committed to each solo.

With these four albums Avid has now reached 1962. King recorded his 42nd and last studio album in 2008. Some way still to go.