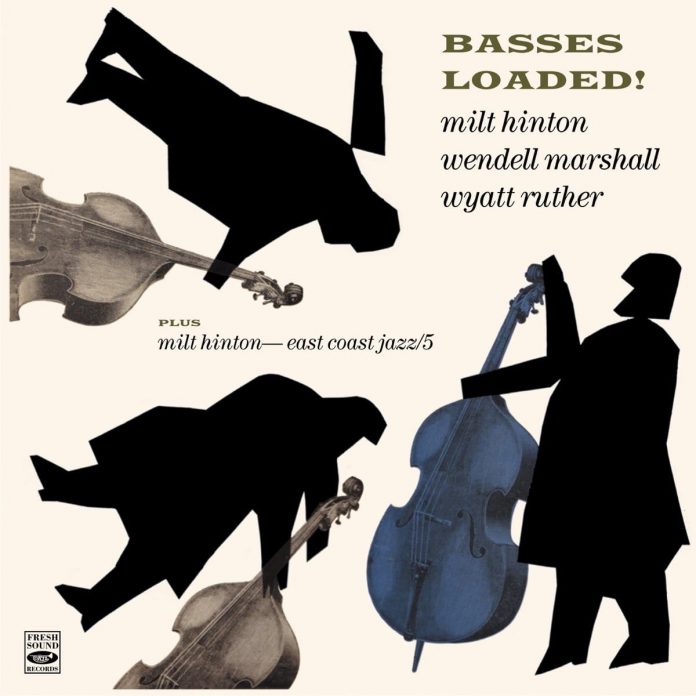 Bass players often take a back seat – some assert themselves, playing a pivotal role; others assume a supporting capacity. Some are leaders; others suffice with regular or occasional solos. The tracks on this CD come from two albums that highlight the talents of three first-rate bassists.

Tracks 1-12 are from Basses Loaded and all three sessions are well arranged by Al Cohn, Billy Byers and Manny Albam respectively – tight, flowing and respectfully featuring each bassist leader.

First up is Milt Hinton, who covered all styles in his long career, establishing himself with Cab Calloway in the 30s and playing with virtually everyone subsequently. The musicians ease through the relaxed starter, Moon Over Miami, then Hinton’s bowed bass introduces I Hear A Rhapsody; he alternates arco and plucking for Duke’s Prelude To A Kiss, with sensitive support from guitarist Barry Galbraith the flute of Al McKusick. The attractively laidback Fump rounds off his allotment of four.

Next turn goes to Duke’s bassist of some years, Wendell Marshall, the arrangements slightly more expansive with a hint of Ellingtonia, though similarly relaxed. The final four numbers, fronted by former Brubeck, Garner, Shearing and Chico Hamilton sideman Bull Ruther, follow this style, although I Poured My Heart suddenly ups the tempo and races to a conclusion with real zip.

The second album of this CD was issued as Hinton’s East Coast Jazz/5 recorded for Bethlehem. It’s a quartet session with some highly enjoyable music, showing off not only the skill of the leader, but also Dick Katz, Osie Johnson and the great Tony Scott. Right from the start, Hinton’s intro sets the bar high and what follows is a master class in bass playing – soloing, duetting, supporting and interacting with the others.

The duets are a real feature of the session, incorporated seamlessly into each number, and the rapport between the musicians is apparent. Most are done at an easy pace, but Upstairs With Milt shows Hinton’s (and everyone’s) speed and dexterity. On Ebony Silhouette he effectively combines bowing and plucking, and there’s some nifty brushwork by Johnson during his interplay with the bass on Pick ’N Pat, which, like several other tracks, also has Scott’s full-bodied bass clarinet.

As usual from Fresh Sounds, the sleeve notes are informative and it’s highly recommended to mainstream jazz fans and, of course, bassists.

Fred Grand - 13 August 2019
The gritty soul jazz of the Timo Lassy Band and DJ-friendly post-bop stylings of his Five Corners Quintet scarcely hint at the directions which the Finnish saxophonist and fellow...