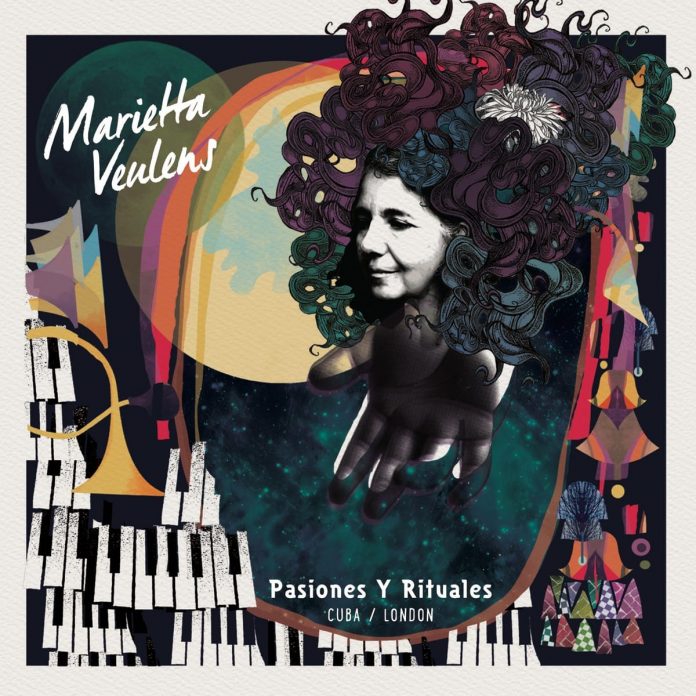 Pianist and composer Marietta Veulens was classically trained by her mother who ran a musical academy in their home town of Matanzas, Cuba. Her father was a percussionist and rumba dancer. She later studied music and composition at the Instituto Superior de Artes in Havana and for 10 years was musical director of an experimental theatre company which toured Europe and Latin America. Veulens emigrated to the UK and now lives in Brixton, London.

Her first album, Piano Cubano, was released in 2006. Pasiones Y Rituales, translated as “Passions and Rituals”, is her second. It combines classical with contemporary Cuban and Afro-Cuban music. Its three sections have taken the best part of 20 years for Veulens to put together. She dedicates each piece to a family member.

The first part, Quimeras (meaning illusion), begins soulfully with a slow tempo piano and bass melody which quickens nicely as flamenco cajón and Cuban percussion join the mix. The second part, Encuentros (encounters) reflects Veulens’s life in Cuba and her contrasting musical and personal experiences in London. Dramatic piano entwines with stirring trumpet lines to culminate in a traditional guaguancó rumba with a fiery carnival climax. There’s a fair amount of vamping, and the climbing block chords to signal apogee, possibly recalling Veulens’s theatrical background, can feel a little excessive in parts.

The last section, Misa Matancera (mass from Matanzas), expresses the links between Spanish and Afro-Cuban cultures. The voices and Afro-Cuban percussion that we hear were recorded by Veulens on analogue tapes in 1992 when she was directing a performance of the Danza Contemporánea de Cuba in Havana. The tapes were later digitised in London and utilised for this album. The piece has five parts: Initiation, Prayers, Trance, Celebration, Contemplation and Catharsis. These include piano, song, ritualistic Afro-Cuban drums and sound effects from objects collected by Veulens over the years such as goat bells, bottles and shells. It has intricate hand drumming, ethereal voices, sonorous church bells, moving cello and a psalm-like solo leading to a climactic finale.

I couldn’t detect much jazz in this music but the performance is compelling nonetheless. A lot of work has clearly gone into this and the composition and musicianship of everyone involved is impressive.

Michael Tucker - 17 February 2020
The widely recorded London (1926-2000) was accorded an appreciative paragraph in the first edition of Leonard Feather's Encyclopedia Of Jazz, where she was characterised as “a warm and intimate...