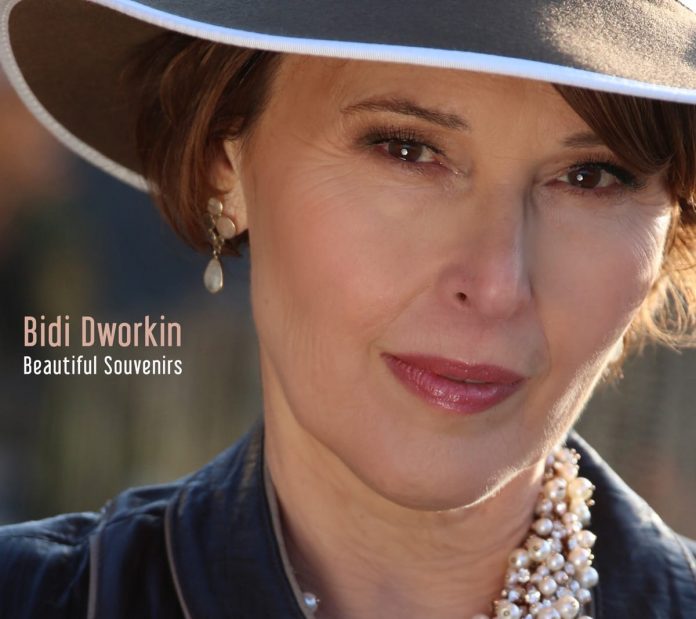 It’s rare to come across an album in which Joni Mitchell cosies up to Cole Porter and Jerome Kern (at least on my block) and it’s even rarer to find Jay Gorney and Yip Harburg’s anthem of The Great Depression, Brother, Can You Spare A Dime, on any album at all in the 21st century. All this may tell you what to expect from Bidi Dworkin’s debut release Beautiful Souvenirs.

I have to be honest and say that I may be out of touch with the current recording scene; this is the second album in as many months that has reached my desk in the wake of a host of positive reviews that – to me at least – appear completely out of proportion to anything on the album in question.

Ms Dworkin has certainly assembled a classy dozen titles, a blend of heavy hitters like Porter, Kern and Schwartz/Dietz plus some very respectable second stringers – Bob Russell, Carl Sigman, Peter DeRose, Ray Evans and Jay Livingston. But I question the wisdom of swinging a ballad like You Don’t Know What Love Is or a protest anthem like Brother, Can You Spare A Dime.

My biggest problem with the pipes is that overall the lady seems flat and lacks sincerity with at best wobbly phrasing. Sinatra, for instance, who learned how to phrase from Mabel Mercer, has made Cy Coleman’s Why Try To Change Me Now his own so was it really a good move to include it here and employ alternate phrasing? Alone Together verges on the bizarre in terms of both phrasing and tempo.

On the plus side the trio is excellent throughout and Ms Dworkin turns in a lovely reading of Morning, Morgantown which suggests that perhaps her forte is the simple rather than the sophisticated.

I must stress that these comments are based on just one playing and it seems clear they are in the minority. The album has obviously brought a great deal of pleasure to a great many people if not, alas, to my fellow residents at Dodo Towers.

Discography
How My Heart Sings; Softly As In A Morning Sunrise; Morning Morgantown; Hum Drum Blues; The Song Is You; Why Try To Change Me Now; You’d Be So Nice To Come Home To; Brother, Can You Spare A Dime; Alone Together; Crazy He Calls Me; Autumn Serenade; You Don’t Know What Love Is (49.57)
Dworkin(v); Eric Hangen (p); Steve Cady (b); Clare Aurenius (d). Old Mill Road Recording, E. Arlington, Vermont. No recording date given.
Twenty-Two Productions TT001