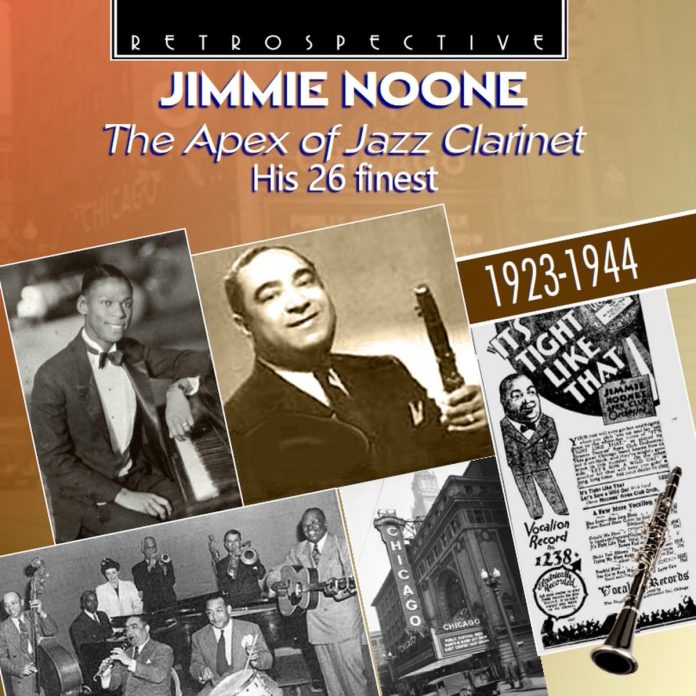 While Jimmie Noone belonged in the upper echelons of the New Orleans clarinet dynasty and might have seemed sophisticated in comparison with, say, Johnny Dodds, he was in fact a much less effective player than either Dodds or, of course, Bechet. His penchant for weak show tunes let him down, and the market he was hoping to reach is a mystery. Having said that, 90% of his best work is on this CD, and it includes many classic performances as well as several rare appearances by good sidemen that are to be savoured.

The earlier tracks, whilst they drew proper attention to Jimmie for the first time, are the least rewarding, having an unimaginative and po-faced quality, which began to ebb when Poston was augmented and finally replaced as his front-line partner. That is not to deny many good moments from Jimmie and Hines, but I find the post-1930 things much more rewarding, and entirely competitive with the embryo mainstream (Kirby and Co.) that surrounded them.

The chugging I Know has no doubt been moved to first place because of its incredibly dexterous (for 1928) clarinet. Noone already soars with much more grace than Dodds was capable of. The 1923 Play That Thing is a fine blues of great clarity, with the two cornets impressive before Jimmy (on his first recording) plays fully and mature blues with an eloquence that pre-dated the later grace of Bigard and Co. There’s more good cornet from Keppard on Tomale.

Track 9 introduces the performances that made Jimmie’s name. We snapped up the two-sided Vocalion 78 of My Daddy for the outrageously bawdy lyrics. A couple of tracks later we get to the fruits of Noone’s genius with three of his tracks from January 1936 with a wonderful cast of new stars including Francis Whitby, a supremely gifted tenor player ahead of his time and in the Hawk/Chu class. Guy Kelly was better known and is very tasteful, and Jimmie plays one of his finest solos on Blues Jumped A Rabbit. I don’t think any group could have beaten the pure mainstream of the Shavers, Brown and Bunn lot.

Four Or Five Times, with its feisty Spencer vocal, is the best version I know of, and these two later sessions raise the disc to its four stars. Plus of course the magnificent attempt at a New Orleans ensemble introducing Preston Jackson with excellent Lonnie and Noone on Hop Scop.

Nigel Jarrett - 05 January 2020
Adding an accordion to a manouche-style band has a certain piquancy in view of the music's Franco-Belgian origins. It evokes Parisian thoroughfares and pavement cafés just as a clarinet...