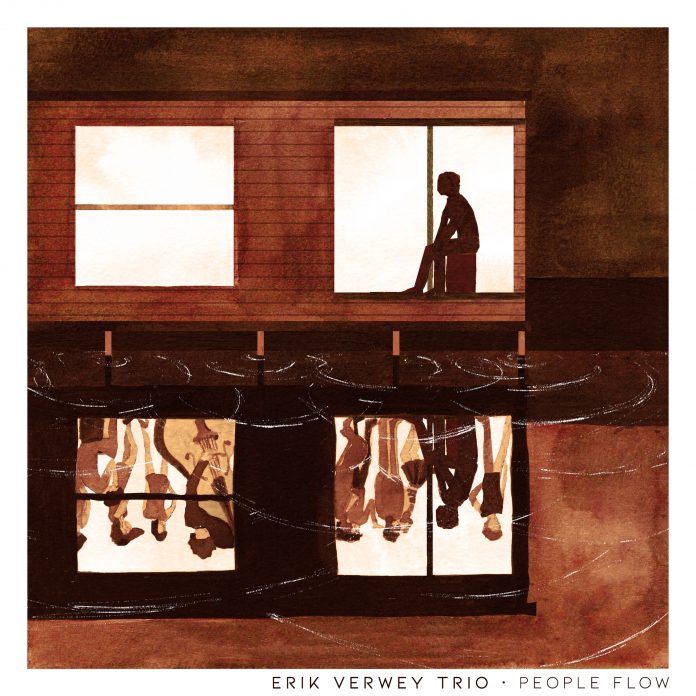 Underscoring elements of classical music has always been a challenge to jazz musicians ever since the accomplishments of Bill Evans. In addition, Evans fulfilled the democratic promise of the trio format. While it would be far-fetched to characterise Evans as the overriding influence on the 33 year-old pianist Erik Verwey, who rather has been inspired by his Dutch mentors Bert van der Brink and Michiel Borstlap, he obviously is fascinated by the symbiosis of classical harmony and the jazz aesthetic. His fusion is delicate. Furthermore, one of the main assets of Verwey’s debut album as a leader, People Flow, is the exceptional flexibility of his piano trio.

The special rapport between Verwey, bassist Daniël van Dalen and drummer Hendrik Müller stems from prolonged cooperation and pervades the repertoire of Verwey compositions and one standard, Ellington/Strayhorn’s Isfahan. Focused yet free-flowing interplay is at the heart of the sprightly Isfahan, which also features the cushion-soft flugelhorn of Teus Nobel. Verwey’s tunes are efforts of varied rhythm, marked by clarity of line, layered bass figures and a tender but dynamic piano touch. Oblique chords and spiralling lines mark the Latin-tinged Casa De Los Viecos and César, a lovely melody that depends on the trio’s conspicuous sense of suspense.

Subtle swing underlines Verwey’s work, which is partly inspired by journeys to South America and the Middle East. The uncluttered reflection of footsteps of Maartje’s Step is very well done. Verwey’s moody songs as What Do You See and Song For You, which likely find their origin in the pianist’s experience of composing music for theatre and cabaret, are good but hardly take root. The warm-blooded brush patterns by Müller and ear-catching bass lines by Van Dalen form the bedrock of Verwey’s most intriguing composition, the intricately structured ballad NYX.

Eyewitnesses have reported that Bill Evans occasionally played the low-down blues in the wee hours, which Evans said, “I could play if I felt like it.” Although the light-hearted, clean-sounding Verwey is by no means a man of the blues, he does present a chunk of groove with Full Force, mostly on account of guest artist Bart Wirtz’s greasy sax playing, a tasty allusion to the electric Varitone experiments of Sonny Stitt and Eddie Harris. Curiosity of a very mature debut album by a fine writer and original pianist.

Elliot Marlow-Stevens - 27 May 2020
Vibraphonist Warren Wolf’s Reincarnation is his fourth leader album on the Mack Avenue label. His first, self-titled album was released in 2011 and the MA sessions have so far...