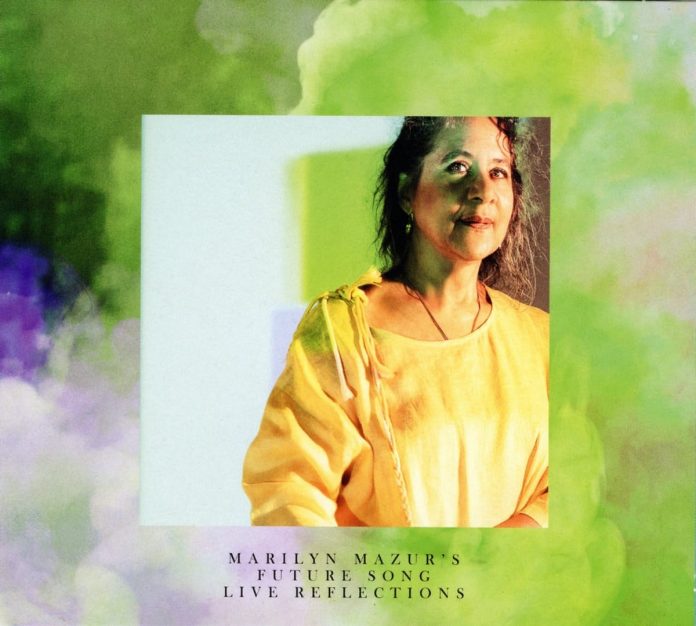 This sparkling release features a suite-like presentation of some of the best live music from the Future Song group which the Danish percussionist, drummer and vocalist (and painter and dancer) Mazur formed in 1989. Lasting until 2009, Future Song was brought together again by Mazur on the occasion of her 60th birthday and the majority of the music here comes from that latter period.

The eponymous first album from this finely attuned ensemble featured a piece, When I Get To The Mountain, that has long functioned as a kind of touchstone for me. So I was very much looking forward to hearing what proved to be a superb set of performances.

It’s one thing to to play with distinction with Gil Evans, Miles Davis, Wayne Shorter and Jan Garbarek, as the colourist and kicker Mazur has done. It’s another thing to put together a world-ranging group – what Mazur calls a “visionary dream band” – and to inspire that group to come up with some of the most stimulating, rhythmically vibrant yet poetically intimate music of the past few decades.

On this evidence Future Song is one of the best of all post-Weather Report groups to have put their own slant on that outstanding band’s category-busting capacity to refigure the relations of composition and improvisation, solo expression and group interplay. As Mazur says, “[The] musicians improvise in a network or, one might say, move around in a maze. It’s not soloist after soloist with accompaniment.” The resultant anima-rich soundscapes – all based on Mazur compositions – evince their own shape-shifting vein of “continuity in change”, embracing as they do both rock energy and jazz subtlety, impressionist tone poem and full-on groove; freshly cast solos and nurturing space, the reverie of a distant echo and the visceral punch of a keening and growling guitar figure.

The Holey offers a lengthy take on all such; while, if Gong-Pri and DreamCatcher profile Molvaer at his lyrical, space-conscious Nordic best, Subway Groove has him cooking urgently over clipped figures in the manner of the Miles of Live Evil. Hear further aspects of Molvaer’s wide-ranging artistry on First Dream and Reflections. Ulrik is similarly impressive, especially on the concluding Vinterstykke [Winter Piece] where the spare authority of his soaring soprano figures both caresses and ignites the ultra-meditative mood.

The female voice has long had a special role in Mazur’s world. If you don’t know it, track down her superb Jordsange/Earth Songs from 1998 with Aviaja Lumholt (v), the Ars Nova vocal ensemble and the Copenhagen Art Ensemble. Live Reflections foregrounds mysterious, wordless episodes of tender invocation and exuberant affirmation in astutely measured passages from Kemanis and Aase as well as the leader herself.

Add to all this various arresting, diversely projected contributions from, e.g., Aarset, Plenar, Hovman and Kleive, the whole underpinned and topped off by Mazur’s world-ranging touch, her organic command of timbre and texture, groove and silence, and what do you have? Outstanding music, as primal as it is sophisticated, from first note to last.

Nic Jones - 11 April 2021
Guitarist Bernstein's CV and discography speak for themselves, and in the latter case anyone who's reasonably well informed about the music will be able to figure the idiom he...