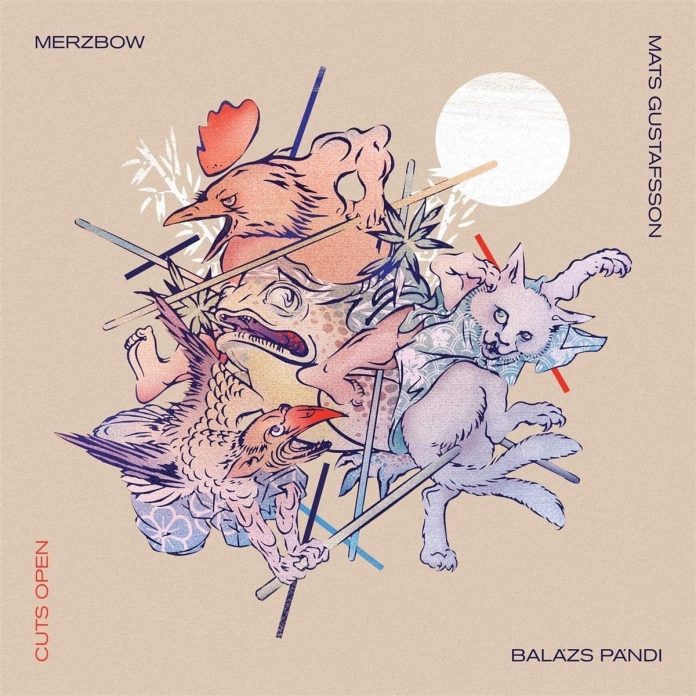 Merzbow will probably be more familiar to fans of experimental avant-rock than jazz audiences. It has passed through various phases (mainly noise-based but at one stage essaying a bit of ambient) and different personnel, but Masami has been a constant and often the only member of the project, which is named after a work by the Dadaist pioneer Kurt Schwitters.

I’m on record as calling Gustafsson “one of the world’s most original and exhilarating saxophonists”. I stand by that today … he crops up in many of my favourite bands, including The Thing, the Barry Guy New Orchestra, The End, Fire! and Fire! Orchestra. Pandi has worked with both musicians before and it is clear from this session why anyone would want to play with him again: he is a resourceful, imaginative, responsive and constructive drummer.

Despite some sputtering bursts of electronics Brother and the opening minutes of Home are relatively (and somewhat unexpectedly) reflective, with Brother featuring restrained electronics, quiet atmospheric flute, fluteophone and subtle percussion. Throughout there is fine work by Pandi. Home starts off in similarly reserved mode until, at around 13 minutes, thunderous percussion begins to bid for the spotlight, careering downhill attended by hoarse baritone cries until the piece finally subsides into a quiet conclusion.

Mother opens with meditative gong/bell-like sounds but becomes increasingly harsh and violent. Door starts off at white heat and maintains the intensity throughout, not so much aiming to unlock the door as batter or burn it down, along with the rest of the house.

The domestic-sounding titles are taken from novels by Swedish author Karin Smirnoff (Gustafsson has said literature is one of his main inspirations) but the performances that bear them do make you worry what the musician’s family life has been like. The session took place just after the end of a tour. This may explain why much of it is relatively quiet, with the emphasis very much on “relatively”. This is a banquet for fans of these musicians, but others might want to keep the door locked and put on some Kenny G.

Mikkel Nordsø Quintet: Out There

Thomas Fletcher - 15 August 2019
Danish guitarist and composer Mikkel Nordsø has always cited John Coltrane and Jimi Hendrix as two of his major influences, Nordsø believes that this album is a true representation...