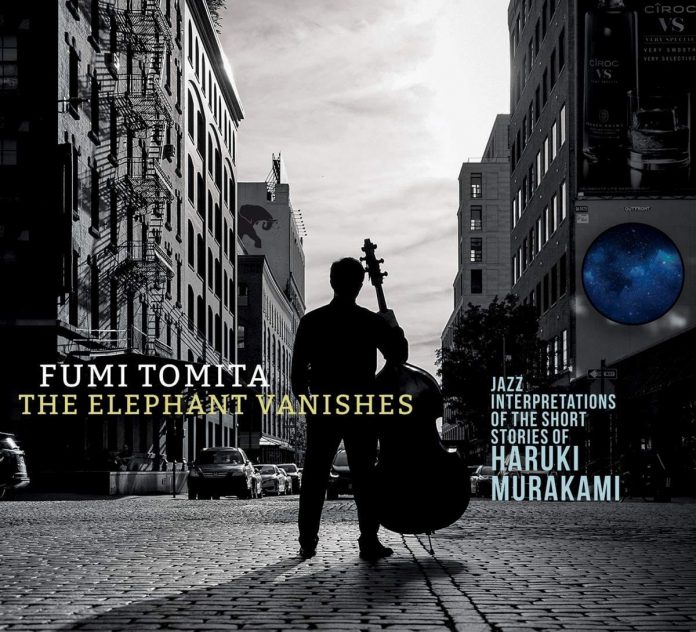 The vanishing elephant refers to a book of stories by Haruki Murakami. Tomita has written and arranged 10 compositions for his quintet reflecting incidents described in the stories which had, he asserts, “a huge impact on me.” They are played with strength and conviction by the musicians who, Tomita informs us, had very little information about the connection to the stories. He wanted to create soundscapes wherein the mood of the story is conveyed in the composition.

This could be described as strong mood music, with tracks like The Fall Of The Roman Empire and Hitler’s Invasion Of Poland as typical themes. For lighter moments listen carefully to T.V. People and Dancing Dwarf, although the latter has some dark amendments where tenor and piano solos play out against bleak, agitated guitar interjections.

Part 2, 1881 Indian Uprising has music based on a Chopin mazurka, opus 68 no. 8 in F minor. The solo though, on guitar, is more bluesy and the melody is based on John Lewis’s Django. The blues are heard also in The Second Bakery Attack where the soloists are more relaxed and jazz focused.

The jazz content is certainly there all through and this music stands alone in its own right as a suite without necessarily referring to the book. Sumi leads his group through the various tempo and mood changes, and solos frequently with a big, fat bass sound. Hitler’s Invasion Of Poland is, indeed, a four and a quarter minute bass exercise.

The band play well together as a group and because of the leader’s themes and his inspiration from the stories, there is a freshness and originality about these tracks. Micklethwaite plays with taste throughout and gets a good, explosive solo on The Realm Of Raging Winds.