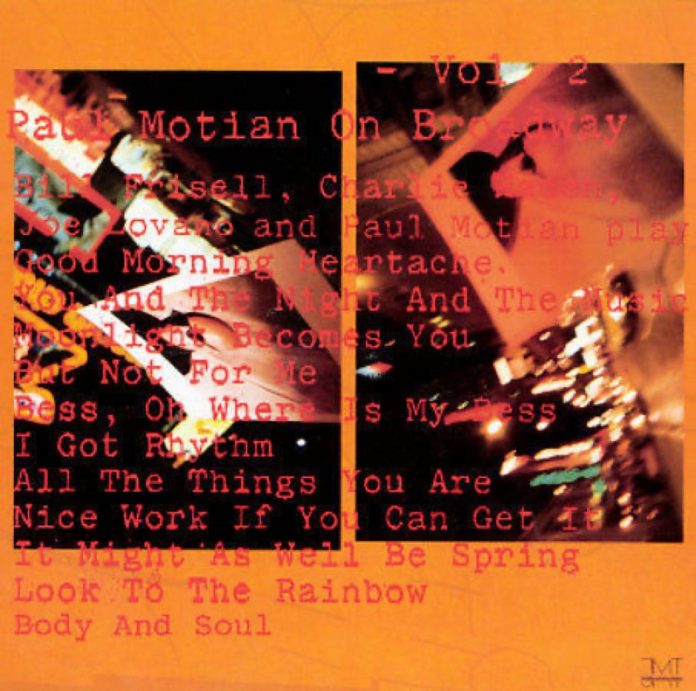 There are implications here which I cannot fully grasp. What is the significance of Charlie Haden, 30 years after supporting Ornette’s revolution, turning up on an album of venerable stan­dards treated in a thoroughly re­spectful way? Did the musicians want to play this music or is this their only passport into a studio these days?

Certainly there is no cynicism here. Motian and Haden play mainly background roles on the first five tracks as Frisell’s shimmering guitar and Lovano’s tenor, with a tone midway between Getz and Coltrane, produce a range of attractive textures.

Lovano seems to be a kind of revivalist. On a slow track such as Moonlight it’s hard not to believe he has listened carefully to Coltrane’s album of ballads, and on But Not For Me he harks even further back to Rollins’ 1954 ver­sion (with Miles). Tracks six, seven and eight bring Motian more into the spotlight with some interesting solos at medium and up tempos, but the last three are slow and gentle with Lovano and Frisell again in impressionistic mood.

This is an album of considerable charm and undeniable craftsmanship, but it lacks the depth and individuality brought to these songs by such interpreters as Davis, Parker, Hawkins and Billie Holiday.

Matthew Wright - 07 May 2022
First, a note about the presentation: 180gm coloured vinyl (although the copy sent was black), thick sturdy cover, same design as original. The introduction to Martin Williams’ original sleeve...