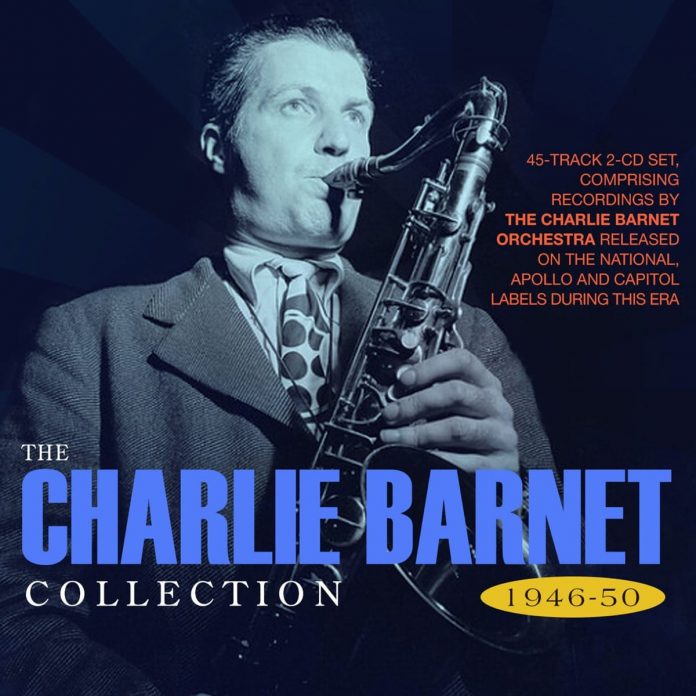 Acrobat has chronicled Charlie Barnet’s early career with Leapin’ At The Lincoln (Fabulous FABCD134) and The Charlie Barnet Collection 1935-47 (Fabulous FADC2039). This reissue takes us up to the post-war period which was the last hurrah for the big band era.

The war-time rationing of petrol and rubber together with star sidemen joining the armed forces had created problems for touring bands. Shellac for making recordings was in short supply and then James Petrillo the AFM president decided on a recording ban on 1 August 1942 which was almost, but not quite, the final straw.

That occurred in 1944 when the federal government imposed a 30% cabaret tax on establishments providing dance music and refreshments, thus undermining the viability of touring bands. The end came around December 1946 after another AFM strike when Benny Goodman, Jack Teagarden, Harry James, Tommy Dorsey, Benny Carter and Les Brown all decided to call it a day.

Charlie Barnet was insulated from many of these problems of course. Billie Holiday called him “A happy-go-lucky millionaire. Living it up and making money talk.” His father was a banker and vice president of the New York Central Railroad which allowed him to subsidise his musical activities. He also benefited from his 1939 hit Cherokee and especially Skyliner from 1944 where he led the section on soprano.

On tenor the leader sounds like a cross between his acknowledged influence Coleman Hawkins and Georgie Auld. There’s some fine Clark Terry on Budandy, Charleston Alley and Dirty Rotten Shame. Maynard Ferguson confidently soars to ledger lines high above the stave on a bravura All The Things You Are and Claude Williamson is at his inventive best on Claude Reigns – a contrafact of The Way You Look Tonight.

Kelley Suttenfield: When We Were Young